Elizabeth Catlett's "Survivor" and the Distillation of Photographic Imagery 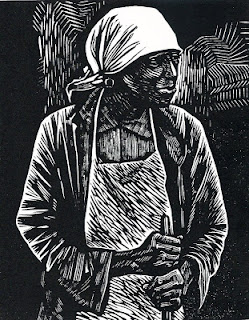 Every year I take several groups of grade school students to La Salle University's Art Museum for field trips, and I was pleased to discover a copy of Elizabeth Catlett's print "Survivor" on view in the current exhibition. The show is Teaching and Learning in the Art Museum: La Salle University Faculty Selections, and is on view through the month of May. This woodcut by Catlett was chosen by a professor who teaches Introduction to Public Health (see label with more info below.)

This image has always been a striking and therefore memorable one for me and I'm sure many others. The print was created from a photograph by Dorothea Lange called Ex-slave with a Long Memory. (Anne Nydam wrote a thoughtful post discussing this on her art blog a few years ago.) Just as Catlett distills Lange's title with her own, shorter one, with her carving she also eliminates details and context, yet intensifies certain aspects of this person depicted in the original photograph. 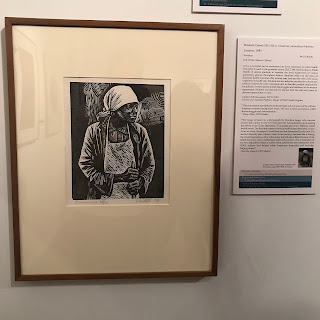 This sort of distillation is something woodcuts inevitably do to representational imagery. In my recent post featuring The Round Table of King Arthur, I referred to it as a game of whisper down the lane. We think something is being copied, but it is not. It is being transformed. A specific kind of subtle yet profound change happens with images sourced very directly from photographs, such as this one.

This transformation of visual information from photographs to woodcuts is something I'm particularly exploring with my new Naked Selfies series. At the start of it are people standing naked in front of a mirror, cell phone in hand, posing in a manner they feel best represents how they want to be seen. They snap a photo, and later I stumble across it while surfing the Internet. There is how I subjectively view it, which is different from the perhaps millions of others who have also seen it, and my perspective influences how I transfer it to a woodcut. Finally there is the print I made as it received by the audience. Perhaps some of them will be seen by the people who took the original photograph. If so, will they recognize themselves? 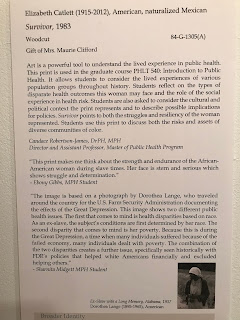 When compared side by side, Catlett's woodcut looks like Lange's photograph, but how much does the woman in Catlett's woodcut resemble the flesh and blood woman whose photograph was taken by Lange? Had she never seen the photograph, would she have recognized herself in the woodcut? Would her friends and family recognize her? I feel this transformation, this obliteration and re-creation is some of the power and purpose, yet also the deep sadness of woodcuts.
Posted by Martha Knox at 5:44 PM