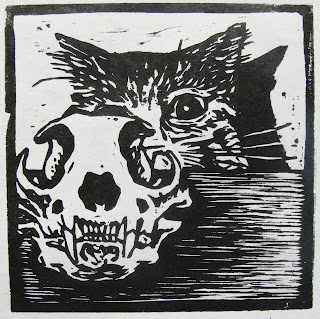 For the cover of my Cats A-Z book I definitely didn't want to have a cute cat. So thinking it through for a while, I came up with this image. The model for the cat peering up from behind the table is my own pet cat Horatio (also known by his nickname "Oshie.") He is named after Hamlet's foil, because Oshie was acquired to be a friend and amusing contrast to my older cat Aubrey. Perhaps the best-known scene in the play Hamlet is when Hamlet picks up the skull of Yorick, and says to Horatio:

Alas, poor Yorick! I knew him, Horatio: a fellow of infinite jest, of most excellent fancy: he hathborne me on his back a thousand times; and now, howabhorred in my imagination it is! my gorge rims atit. Here hung those lips that I have kissed I knownot how oft. Where be your gibes now? Your gambols? Your songs? Your flashes of merriment,that were wont to set the table on a roar? Not one now, to mock your own grinning? quite chap-fallen? Now get you to my lady's chamber, and tell her, lether paint an inch thick, to this favour she must come; make her laugh at that.

Posted by Martha Knox at 6:43 PM No comments:

In Memory of Sascha 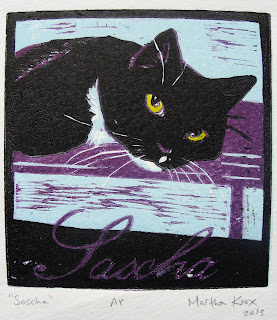 Just over a year ago I made a small print in tribute to my friend's cat who passed away (view and read about it here.) That same friend has just lost her other cat, Sascha. This loss especially saddens me, partially because it was so close to the passing of Griffin, and partially because Sascha was the same age as my own black cat Aubrey, and so I'm reminded that his time grows more and more limited. Like my Aubrey, Sascha was full of attitude. She didn't like cuddling, and if you crossed her or even caught her in a bad mood, watch out for teeth and claws! If I came over to visit with my baby, Sascha had to be locked in a separate room. But who doesn't love a diva even if she is high maintenance. Sascha had unique and quirky tuxedo markings, including black whiskers above one eye and white above the other. I commemorate her with this image, and hope the expression does something to capture her distinct personality.
Posted by Martha Knox at 6:08 PM 1 comment: 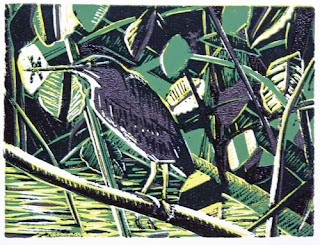 Image posted with the permission of the artist. Full information about this print and original copies of it and other works of art can be purchased at Ken Januski's Etsy Store.  More about the artist in general can be found on his artist's website and blog.

At first I only see the bird. Stout and sturdy frame, it stares across calm waters. Reading the title, I then seek the dragonfly. I soon find it in the heron's mouth, its wings still spread out. The poor bug is frozen in a final moment before being devoured. Now that I've found it, it sticks out like a sore thumb. "X" marks the spot over a pale leaf in the background. And then I notice other leaves, various shades of green, and shapes which echo that of the bird. Stems and stalks, too, jut this way and that, straight or just slightly curved like the bird's beak and skinny legs. Sharp angles, fat stripes, and hash-marks beat in all directions. The organic and geometric intertwine. The whole scene reverberates like Kente cloth.

The bird is still. The bug is doomed. Me, I want to dance!

"At Walberswick" by Sylvan Boxsius 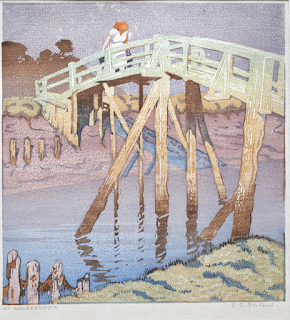 The hardest part is going up hill, especially while carrying a heavy load. If I know that with every step I come closer to an apex and the relief of descent, it's easier to trudge along at a steady pace. Such luxury is only possible when I tread on already familiar paths.

It's a still and almost soundless day. The sun rays filtered through a blue-grey atmosphere has turned the landscape every shade of pastel. The water moves, but barely, and in a short, steady but slow rhythm.

The beams that hold up the bridge are like legs. Legs of some great beast about to walk off, inadvertently carrying me with him on his arched back. What would I do in the case of such unexpected adventure? Drop my buckets and cling fearfully to the side rail until the ride is over? Laugh with giddy relief and stamp my feet to prod the beast to giddy-up faster? Or maybe I'd just keep trudging forward, head down, and pretend that nothing out of the ordinary has happened, or ever will.
Posted by Martha Knox at 12:40 PM 1 comment: