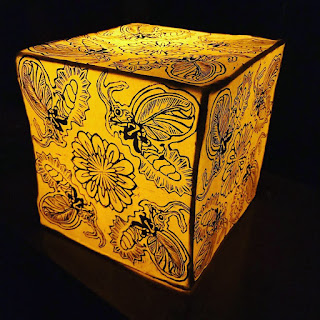 Here is the my first paper lantern all finished. The posted about making the linocut print for it here, and I also did a version of it as a hand-colored mandala, posted here.

This piece will be in the Waiting In Hades exhibition at the University City Arts League. The opening is February 8 from 6-8pm. 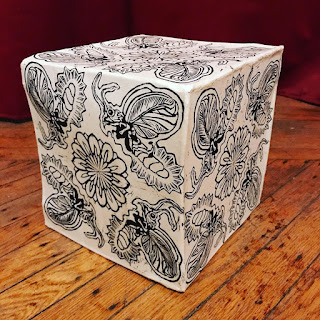 Posted by Martha Knox at 7:08 PM No comments: 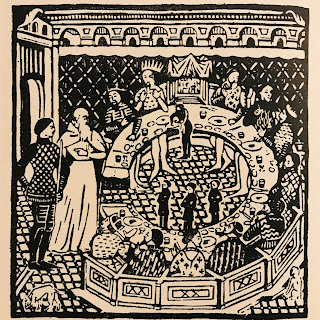 It is interesting that in this particular print, the patterns on the floor, wall, and repetitions in the architectural structure are more clearly defined than the facial features of the individuals, the patterns on their clothing, or the food they eat. Some things change more quickly than others, and generations of humanity pass along at a swift pace.
Posted by Martha Knox at 6:02 PM No comments: 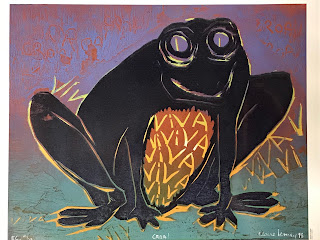 I found a large, poster version of this woodcut in a pile of art posters at the school I work at and instantly swooned. I'd never heard of Claire Lemay, but online quickly found that she is an artist living in Quebec and you can view more of her work on her website. I was surprised to learn the artist is Canadian because the bright colors combined with the bold, black, expressive shape of the figure and the word Viva made me think of Mexican and South American woodcuts I've seen. This frog also reminds me a bit of alebrijes, the Mexican sculptures of animals made of wood or paper mache that are colorfully patterned and rather otherwordly in appearance. The eyes of this frog are so dauntingly round. Being the same purple as the background, they seem almost like holes, and yet the narrow, green pupils signify the substance of actual eyes in those cut-out sockets. The frog is here, vividly demanding our attention, here to remind us, the living, to really live.
Posted by Martha Knox at 5:53 PM No comments:

Antonio Frasconi on the Vietnam War 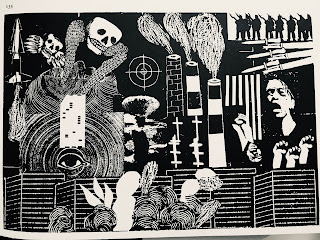 Thinking about what's happening in Venezuela right now and the role our government might take on this matter as I paged through prints by Frasconi made in response to the Vietnam War. This one is a selection from "On the Slain Collegians by Herman Melville".

"It is important to remember that wars look good to many people in the beginning because something terrible has been done, and people feel that something must be done in retaliation. Only later does the thinking and questioning begin."   -Howard Zinn, from Artists In Time of War

Posted by Martha Knox at 6:02 AM No comments: 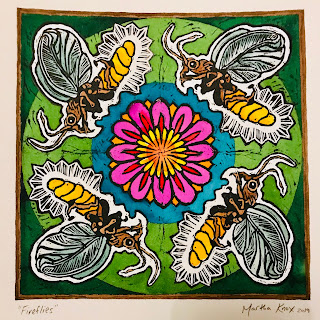 After making this black and white print for a paper lantern I'm working on, I decided there also needed to be a hand-colored version.
Posted by Martha Knox at 6:48 PM No comments: 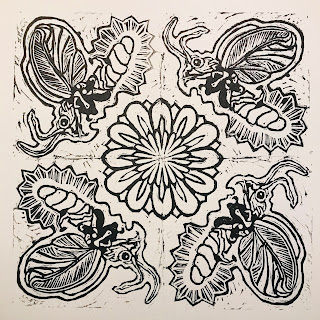 Last year I made a couple 1" x 1" stamps to print in a circular pattern such as this (view those attempts here and here), but they weren't really going anywhere, so I moved on.

Last week I heard about a call for entries into a show at the University City Arts League where I teach. The exhibit is called "Waiting in Hades" and is open to all ages. The only requirement is that the works of art emit or reflect light. The lights will be turned out in the gallery for the opening on February 8 from 6-8pm.

This opportunity sounded like great fun, especially since my two daughters can enter their own pieces in along with mine. My eldest has created a Sharpie drawing on glow-in-the-dark coated paper. My youngest is creating a ceramic candle holder. I mulled the idea over in my head for a while since there was initially a flood of ideas, but as I'm mainly a printmaker, I decided to make a paper lantern with relief printing. It is going to be a small, square, box lantern, and this is a proof of the print I made for it. I like it quite a bit. I'll post more images when the piece is finished and after the exhibition opening.
Posted by Martha Knox at 5:50 PM No comments: 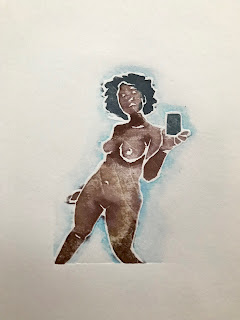 Here's the last of 4 new woodcuts in this new series. All of the prints from this series can be viewed in this Pinterest album. Read more about the series in this initial blog post.
Posted by Martha Knox at 11:36 AM No comments: 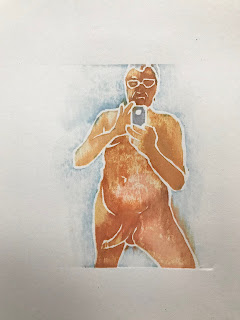 Here's the third of 4 new woodcuts in that series. All of the prints from this series can be viewed in this Pinterest album. Read more about the series in this initial blog post.
Posted by Martha Knox at 11:35 AM No comments: 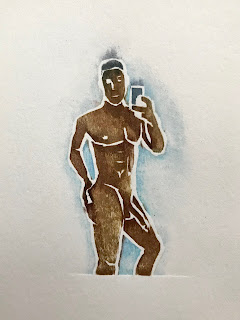 Here's the second of 4 new woodcuts in that series. All of the prints from this series can be viewed in this Pinterest album. Read more about the series in this initial blog post.
Posted by Martha Knox at 11:34 AM No comments: 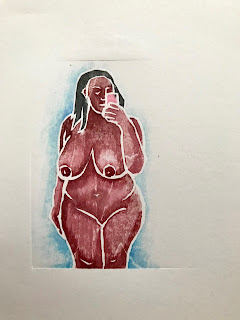 It's a New Year! That means back to work - hooray! Now that the holiday season, with all its obligations and distractions is over, I'm throwing myself back into my studio work with serious energy and enthusiasm.

I've been wanting to get back to the Naked Selfies series that I started in 2017 for a while, and last month I finally found the motivation. Here's the first of 4 new woodcuts in that series.

All of the prints from this series can be viewed in this Pinterest album. Read more about the series in this initial blog post.