Hanko for "a show with zefrank" 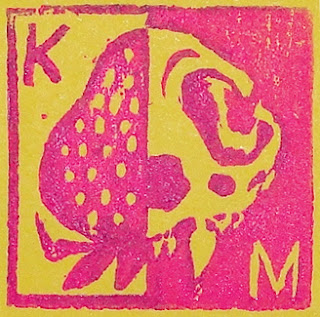 I took about 6 weeks off from writing in this blog. Didn't plan it, just happened. (Insert excuses here.) Moving on...


This is a print from a one by one inch wood stamp I made to use as my own signature seal. It was part of a collective project for a show with ze frank.

I spent more time deciding on what image to include than I spent actually making the stamp. I even drew two other possibilities, both hairless cats. But in the end I decided on this half upsidedown strawberry, half cat skull. I love the juxtaposition of a plump, juicy fruit with a reminder of mortality. And why a cat skull? Hard to say, really. Perhaps because it distances me and viewers a bit from the harshness of that reminder. Or maybe because it further emphasizes the other end of a spectrum to feature an outright carnivore with sharp canine teeth alongside a tasty fruit. Maybe something else deep in my subconscious that hasn't yet occurred to me. Whatever the reasons I like the way the leaves and seeds of the strawberry visually echo the cat's teeth.

The K and M are (obviously) for my initials. I could lie and say that I planned to do them backward to go with  how half of the image is upsidedown, but I really just made this stamp so spontaneously directly on the wood and forgot that it would print backward. So actually I had drawn it so it read M then K from left to right but the K was deliberately backward. Since it printed the mirror image the K is in the correct orientation, but it reads in the backward order. Kind of all worked out despite my bumbling. Funny that.

Posted by Martha Knox at 7:44 PM No comments: