"Man in Storm" by Isaac Friedlander 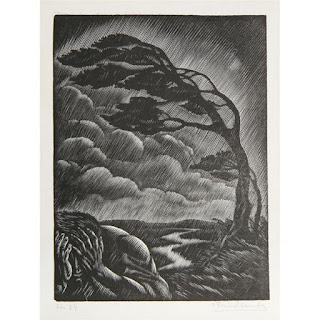 The storm is fierce, and he has no shelter. He's withered and bent like the grasses and trees, but with less grace and more fear. A crooked river stabs him the back like a bolt of lightening. He does not know whether he should hope for a quick death now or to survive only to suffer the terrible aftermath.
Posted by Martha Knox at 7:11 AM No comments: 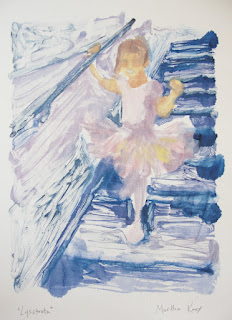 This is a little monotype (image is approximately 6" x 9") I did of Lysistrata walking down the steps to her ballet class. I did 6 monotypes in 3 hours during a workshop I was leading, and I was the most satisfied with this one. I used Createx Monotype Colors on a plexiglass sheet and applied the ink with paint brushes.

The thing with monotypes is that the first one always sucks and I have to work at them for at least 2-3 hours just to produce anything decent. I would love to spend a week doing nothing but monotypes for 4 hours after breakfast and another 4 hours after lunch. I get chills thinking about the amount of colorful, expressive, and spontaneous imagery which would result. But that's a lot of time and money for supplies. Ah, plans for retirement...
Posted by Martha Knox at 9:37 AM No comments:

"The Visitor" by Kathleen Neeley 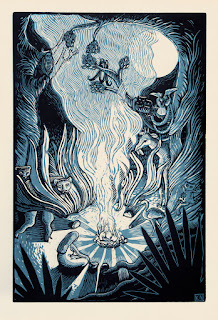 Image posted with the permission of the artist. More about Kathleen Neeley can be found online at her Etsy Store, Flickr, and Twitter.

Elephantine foliage slouch and wave against the smoke from the fire. Smoke rises up to a two-toned moon and starless night sky. Creeping bark and pebbled shadows follow suit, scurrying upward. It is as if they were cockroaches suddenly exposed in the light, and the moon were a crack in the wall and their only means of escape. Tree roots jut out from under a leaf like a pair of naked legs. Their ambulatory form is echoed over and over again, for there are many pairs of long limbs in this scene. And speaking of pairs, in the foreground, two jungle-shrubs fan out, startled, like black hands of a startled monster who was just passing by. It is curious, the way the solitary figure sits - perhaps in meditation - at the dramatically vaporous fire while a collection of nocturnal beasties bear witness to her vigil. Even the rocks seem attentive and eager to join the crowd of nightalls. Logic suggests they are drawn by the warmth, yet I'm convinced this is the coolest place in the entire forest.

Posted by Martha Knox at 8:02 PM No comments: 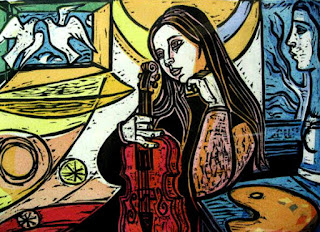 A comment on one of my recent blog posts compared one of my prints to that of Irving Amen. So I checked Amen out, and in addition to feeling flattered that one of my works would be compared to his, I'm shocked that I didn't know about him before since his prints are striking and his work spans decades. In fact, the artist only passed away last year at the age of 91. Here's a link to his official webpage for those who would like to check out more of his prints (as well as sculptures and paintings.) Also, there is a lovely article about Amen written in 2011 that can be read here.

The word pensées has a primarily Christian association due to the writings by Christian apologist Blaise Pascal of the same title. However, the term literally means "thoughts", and the imagery here transcends a narrowly Christian interpretation. Especially when viewed in context with the rest of Amen's work that expresses broad religious tolerance, and the fact that Amen himself was Jewish. Here are my thoughts on this Pensées:

I am reminded of those moments right after deeply experiencing or creating art. The senses so profoundly engaged for a period of time, and now suddenly there is silence and air to breath and reflect. Sitting in the seat at a movie theater, unable to move under the weight of thoughts and emotions as the closing credits roll across the screen. These are moments that engage the whole body, felt not only in the heart, but in muscles, and skin, and bones. For a brief reverie, the world is washed anew. The look of colors and faces is altered, and the very air surrounding us seems pregnant with connotation. Though we cannot live inside such moments, they make life more worthwhile.
Posted by Martha Knox at 2:34 PM No comments: 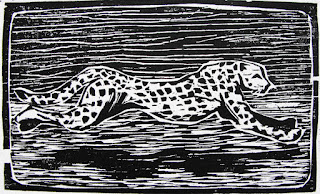 Not far from here, a small gazelle who had strayed from his group flees for his life. The grasses and trees all around have become a panoramic streak. He has entered a cloistered state where the only sound is the rapid pounding of his own steps and breath. This nightmare will be short, a minute at the most. Once he's been targeted by the spotted beast, he can hide, but he can't run.

The cheetah is the fastest land animal on earth. They are swift predators are sprinters who can accelerate from zero to over one hundred miles per hour in less than five seconds.

"Ready To Go" by John Tate 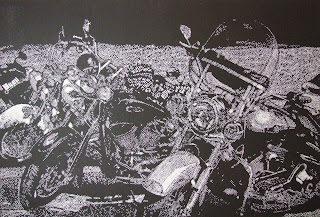 Image posted with the permission of the artist. More of John Tate's photo-realistic, black and white woodcuts can be viewed and purchased on his Etsy Store.

I wrote two short poems in response to this one:

I.
Dense, metal bodies
Leaning against the climate
Still, yet, poised to fly

We are all made of atoms, and
All atoms made of particles
Said to be elementary.
Sometimes when I look at things like
The skyline of my city at dusk, the
Shape of my daughter's foot, or
A really, good beef stew,
I want to worship those particles.
I want to line them all up in a row, and
Follow that path just over the blackened horizon.


Addendum: When I contacted John Tate to get permission to post the image on this blog, he also gave this explanation of his unique process:

Years ago, when I was doing my graduate work, a printmaking professor of mine referred to what I do as "digital woodcut". The process involves taking a photograph of something or bringing a montage (I used to do woodland creatures) into Photoshop and rendering the image in Black and White, then bumping up the contrast, then cross-hatching it. The next step is transferring the image to the woodblock. I then use a dremel tool with a cut-off wheel to make anywhere from 10,000 to sometimes as many as 40,000 cuts. The block is then sealed and printed.I found it's the only way to get the kind of detail I wanted out of wood. They are best viewed, like an Impressionist Painting, at about ten feet away. They almost look photographic at this distance.

Posted by Martha Knox at 7:48 PM No comments: