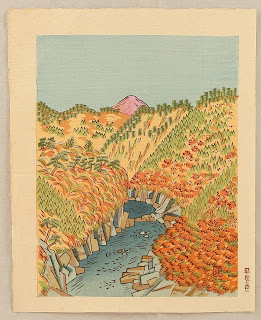 While teaching at an art camp this summer, a fellow teaching artist showed me a book about Unichi Hiratsuka, a contemporary Japanese woodblock artist who lived in the States for nearly half his life and died in 1997. Here is a link to a website created by his grandchildren and which provides many more images of his work and information about his prolific and notable career. I think this image, with the playful color and simplified geometry used to describe the landscape, shows how Hiratsuka masterfully merged traditional Japanese and modern Western art influences.

The top of a pink mountain peeks over the edge to spy on the river. Swaths of autumn trees and evergreens partially obscure the mountaintop's view. But it can be seen that the river is calm and clear. The surface jiggles and sways a bit as it works around rocks and bends in its natural flow toward the someday sea.

Posted by Martha Knox at 7:09 PM No comments: 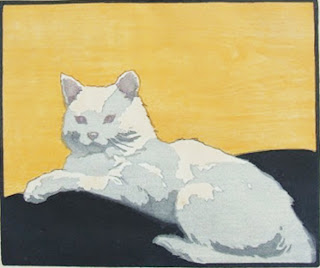 I've been posting a lot of woodcuts and wood engravings that are very complicated, with lots of little details. So I decided I needed a breather. A little air to move around in. And I found it in this simple print of a cat by Arthur Read. The way the bottom of the tail is cropped, and the excess amount of space above the cat reminds me of snapshots. How amateur photographers almost always shoot the photo from their own eye level, and therefore end up cutting off their subjects at the feet while leaving so much extra space above their heads. Here, of course, the cropping is intentional. The cat seems weighted to the black surface, while the sunshine-colored wall behind him seems cheery and open, despite the cat's pensive expression. Cats always seem pensive.
Posted by Martha Knox at 6:47 PM No comments: 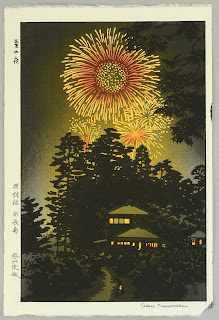 Night sky brings no relief from the summer heat. Still, in the heat there is radiance. A great, glowing sunflower in the sky. Yellow light after the sun has gone to bed. Open pedals after the flowers have closed up shop. And heat. Heat that radiates from the fire in the sky like a dragon's breath. That spills and swirls through the atmosphere like green soup. Heat that kills the stomach's desire for food, and yet here, tonight, the eyes feast.
Posted by Martha Knox at 1:04 PM No comments:

"The Workroom Window" by Howard Phipps 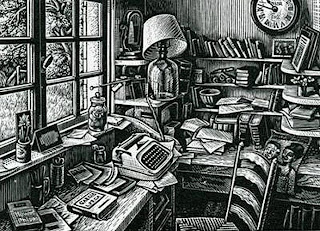 The typewriter, lampshade, and chair beckon the artist to return. A line of books lean and fill the emptiness where others have been taken down for reference. Disheveled papers litter the adjoining desks. The clock ticks, an ever-present reminder of deadlines. There are always deadlines, some set by us, some by fate. And there is always work to do. Thank goodness, there is always work to do.

Learn more about the art of Howard Phipps here.
Posted by Martha Knox at 8:34 AM No comments: 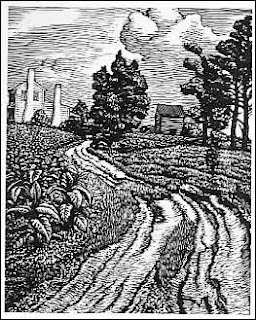 I'm in Williamsburg, Virginia and stumbled on a few woodcuts by J. J. Lankes in a used and rare book store. Lankes was an American printmaker associated with the Arts and Crafts Movement and influential in establishing woodcuts as a legitimate fine art medium.

This isn't one of the images I saw in the book store today, but I decided to write about it because it spoke to me the most about what I've been noticing while being here in Virginia. This being a region of the country known for English settlement and the founding of the United States, I keep noticing the trees, the roll of the land, the billowing clouds up in the sky. Basically the grandeur, the beauty, and the threat of nature. We've had both warm days full of sunshine and storms with thunder and lightning this week, which heightens my awareness of the natural presence. My thoughts drift to thinking about the Native Americans who had long ago come to know the land and how to survive, contrasted with the settlers who had to learn (and quite often perished in their attempts.) Knowing the last few centuries of history of this land, the air somehow feels thick, and the ground feels more dense.

To get back to Lankes's print above, I love how the horizon cuts at meandering angle. I can imagine feeling jostled and bumped as I ride over this road. I can feel the wind pushing the big, puffy clouds across the sky. I love how the trees are darker and bigger than the human structures, and even the big, chunky leaves of plants in the foreground seem to suggest a persistence and strength of flora. I feel the people here are somewhat like fleas on a dog. We can survive happily, but only with a little luck and at the discretion of that on which we ride. If we spread too much, try to take over, we're asking for trouble.
Posted by Martha Knox at 2:50 PM No comments:

An illustration by Alan Bold 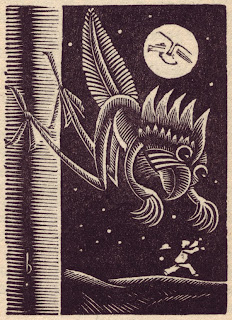 This image is from the book Stuff and Nonsense by Walter de la Mare, with illustrations by Alan Bold. I discovered this image along with many other wonderful prints by bold at Will Schofield's blog 50 Watts.

The tiny man runs, but a giant bird with war paint, a spiky crown, and great, heavy feather of a tail is over top. The man is as good as caught. The bird is so giant, the man so minuscule, but without a third, true-to-type variable, I cannot figure out who is unnaturally re-sized.

Another part of my brain niggles at me. It must be an illusion, it insists. The bird is in the foreground, and the man is far away. Yes, that must be it. After all, look at the pole or tree the bird is perched on sideways. Does it not seem to be in front of the rolling plain? I turn my gaze to the bottom, left corner, and I am convinced. But I glance back at the bird and man, and I still feel charged by the thought of imminent kill.

What is the story here? I suppose I'll have to get my hands on the book, or be satisfied with the unknown. In the meantime, the man in the moon smiles. Is he entertained by either the chase and the impending casualty or the trick being played on the viewer, or is he oblivious and beaming at some other show?
Posted by Martha Knox at 2:07 PM 1 comment: 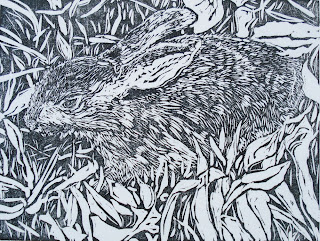 Image posted with the permission of the artist. View and purchase more of Lisa Toth's prints at her Etsy store.

Had I not happened to glance directly at her, I might have never noticed her there, neatly couched in a bed of grass. Does she know I'm watching? Would she run if she did? I wonder, too, if these life and death games of hide and seek are taken in routine stride, or rather, an insurmountable barrier to a life of total bliss. I wish I could tell her that I'm no owl or bobcat, no threat to her rest and playful romps. Her nose twitches. Her ears lay back. I walk away at a casual pace.
Posted by Martha Knox at 5:42 AM No comments: 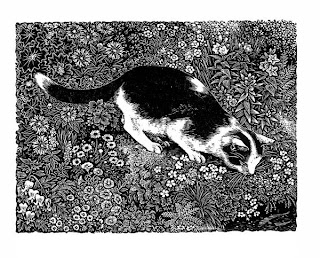 Image posted with the permission of the artist. More about Sue Scullard and her wood engravings can be viewed at her website here.

Flowers surround the cat. Flowers that grow slowly. Flowers that bend and shiver gently in the wind, and whose subtle fragrance permeates the air all around. The cat is poised on the water's edge, watching. Ready. The water oscillates, but only slightly, from the breeze and some movement below. Movement carefully observed by the cat. Moments pass by at a silent, steady pace. The flowers appear still, but are growing and releasing their lovely scents. Patience is all.
Posted by Martha Knox at 7:19 PM No comments: 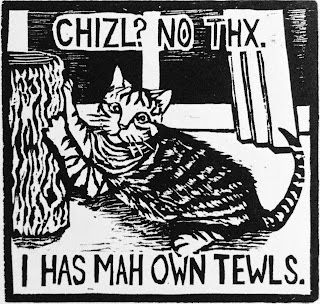 I'm going for ironic pop culture reference here. For those who don't know, a lolcat, or cat meme, is normally a photographic image of a cat combined with text for the purpose of humor.
Posted by Martha Knox at 8:42 PM No comments: 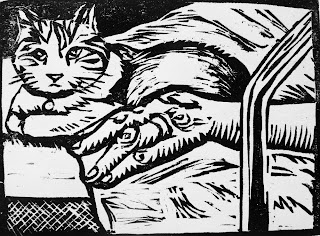 This is the new entry for "O": Oscar, known also as the "Death Cat" for his ability to predict when residents at the Steere House Nursing and Rehabilitation Center were going to die. He was a resident therapy cat who would stay with patients who died hours later. It is suspected that the key to Oscar's ability to know patients were dying is his smelling ketones, or chemicals which are released by dying cells.
Posted by Martha Knox at 7:01 AM No comments: 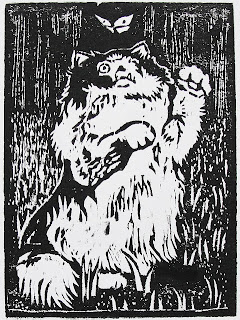 I am revising some of my Cats A-Z selections. Here we have a new entry for "C."

Chase was badly injured in an accident as a kitten. Though she is now a perfectly healthy cat living a normal life, her face is still seriously disfigured. Chase's owners maintain a blog and facebook page where they post photos and stories of Chase's daily life. She has attracted a considerable following on the Internet and has become an inspiration to many people who are also seriously disfigured.

Posted by Martha Knox at 2:06 PM No comments: