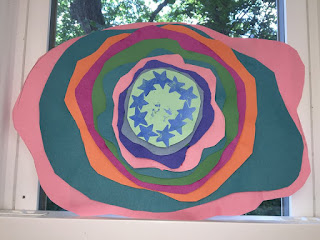 This is my fourth year teaching 3rd-6th graders at the Community Art Center's Summer Spree camp. This year's theme is "Earth Forms", so this week after having my 4th graders complete a collograph printmaking series, we took their "mandala" collographs, some construction paper, and turned them into collages inspired by topographical maps. 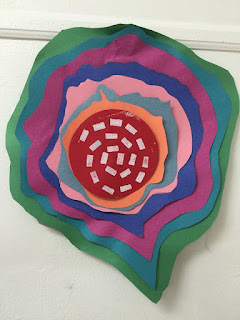 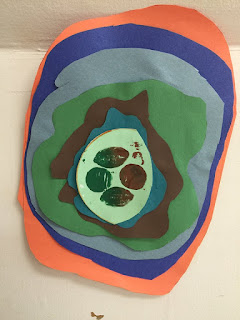 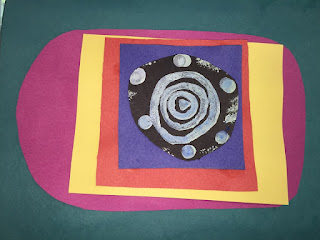 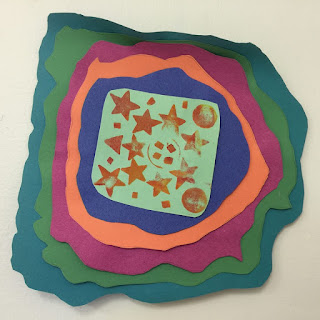 Posted by Martha Knox at 7:34 PM No comments: 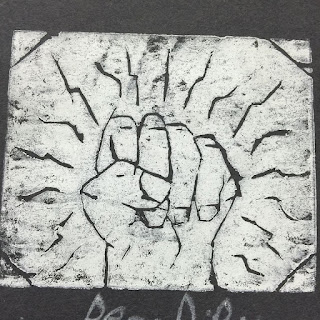 These are two versions of a woodcut by Dean DiPrinzio, a student I've taught four summers during the Summer Spree Art Camp of the Community Arts Center in Wallingford, PA. He's now in 6th grade and it seems art is this kid's life. With the support of his parents, especially his dad Michael DiPrinzio who is also an artist, he's quick to tell people that he exhibits and sells his work. Here's a link to an article about one of their shows.

This summer I asked Dean if he's ever made a woodcut, and he hadn't, so brought him a 3" x 4" shina plywood block and some carving tools, and he made this great little print. I hope he frames the two versions together and exhibits them somewhere soon. 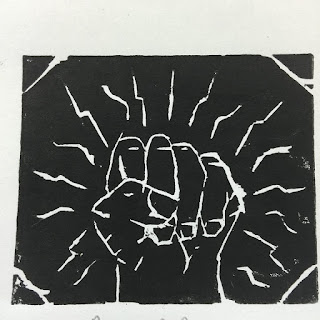 Posted by Martha Knox at 7:30 PM No comments: 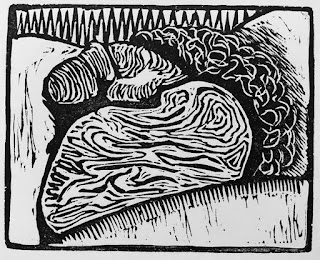 This was based on a sketch I made about 15 years ago. It's okay. I might like it better hand colored.
Posted by Martha Knox at 8:36 PM No comments: 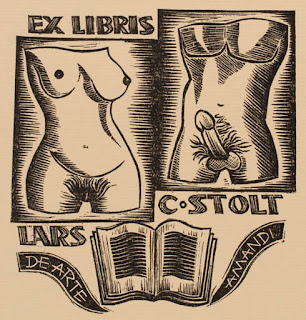 And when we get down to it, isn't this just what's on our minds most of the time anyway?
Posted by Martha Knox at 7:54 PM No comments: 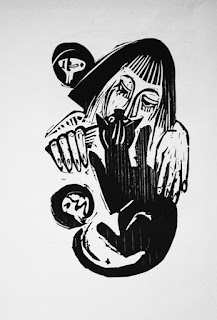 Sharp nails reach out, black hairs, shiny and straight as a poker. A connection about to be made, lunge and seize. What is this relationship? Are we friends or foes? Equals or master and captive? And if the latter, which is which?
Posted by Martha Knox at 8:53 PM No comments: 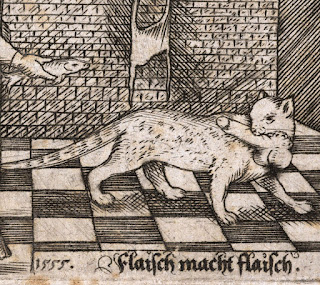 Posted by Martha Knox at 9:00 PM No comments: 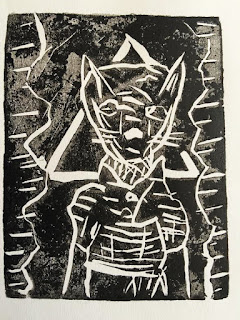 For the last two days of my 2D Mixed Media after school class at the University City Arts League I decided to let the students pick whatever medium we'd used in class that they wanted to explore more. (It was a very small class, so I could give them a lot of freedom and individual attention.) This one 4th grader, Alfie, really loves to draw from his imagination, so he decided to do a couple more black and white linocuts. I thought these were pretty wonderful, especially for having executed in under 3 hours total. 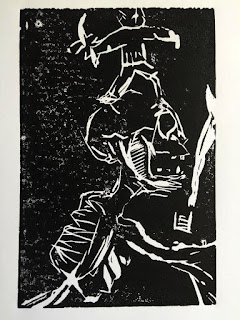 Posted by Martha Knox at 6:49 PM No comments: 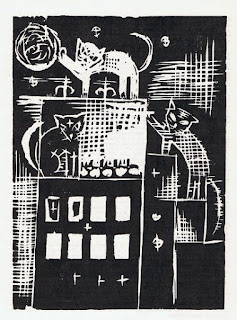 It didn't take much for the moon to lure them out of the shadows. Being bred as pets, they have no place, and so feel the world is completely their own. These structures are their junglegym. The night air is their scratching post. The stars, their catnip chew toys. Listen to the caterwaul of these furry phantoms. The cries will be familiar; echoed in our own courage and cowardice.
Posted by Martha Knox at 8:34 AM No comments: 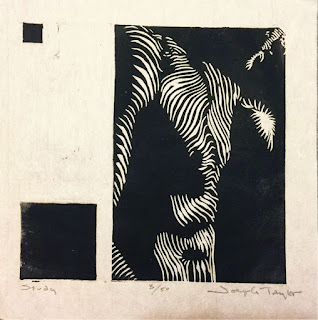 This the last of four posts highlighting prints from  Baren Forum's #68 Exchange. The theme was "Nudes", and the paper size was 8" x 8". The first post can be found here and the second can be found here.
Fourth: simple lines Featuring Study by Joseph Taylor (above) and  mons Veneris by Andrew Stone  (below.)

In both of these prints I greatly appreciate the economy with which the artists describe parts of the human figure. Both border on the abstract, and yet convincingly capture the curved, organic contours of human bodies. 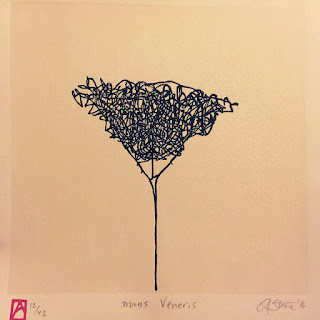 The first describes a man's torso in stark, bold, almost uniform white lines. Black squares counterbalance the figure's weight. In the colophon Taylor describes it almost apologetically as a "quick study," but often it is the work done most swiftly and spontaneously that is also the most free and natural.The second print describes a woman's pubic hair, labia, and thighs. There is a subtle sensitivity of line that achieves balance without perfect symmetry. Stone offers some noteworthy thoughts about this print and subject on his own blog both here and here. 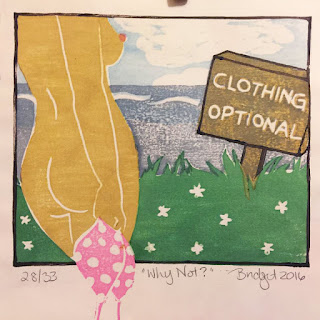 This the third of four posts highlighting prints from  Baren Forum's #68 Exchange. The theme was "Nudes", and the paper size was 8" x 8". The first post can be found here and the second can be found here.
Third: nude beach humor Featuring Why Not? by Bridget Pilip Murphy (above) and Nudist Newbie by Therese Krupp (below.)

Two prints in this exchange dealt with public nudity in a whimsical manner. Specifically, they both deal with the emotional charge felt in the initial moments after the subject (in both cases, a woman) has decided to enter an outdoor nudist space.

The first frames the naked torso of a perfectly proportioned venus as she enters a verdant beach setting, the grass speckled with little, cheery flowers. And though we only see her body below the shoulders, the title presumably puts us into her head. She is the one who has just removed her playful polka dot bikini in response to the sign that reads "Clothing Optional." As the title queries, indeed, with such a figure that could only draw admiring, lustful, or envious gazes, why not? 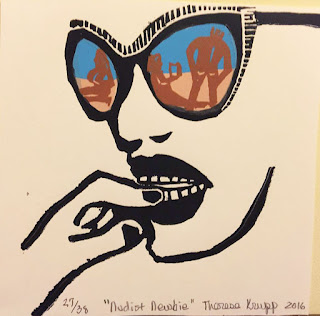 The second print sort of does the opposite. Here we see only the subject's face, though from the title "Nudist Newbie" we can assume she is naked or about to be so. Instead of us looking at her body, we see in the mirror of her sunglasses that she is looking at other peoples' bodies, and literally biting her fingernail over her predicament.

It seems that the second print answers the question posed by the title of the first. 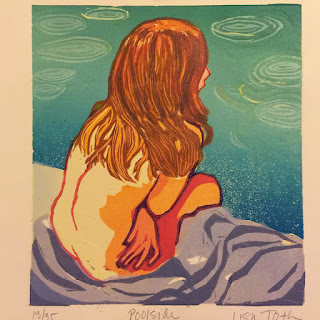 This the second of four posts highlighting prints from  Baren Forum's #68 Exchange. The theme was "Nudes", and the paper size was 8" x 8". The first post can be found here.
Second: wet feet, their backs turned  Featuring Poolside by Lisa Toth (above) and Nude by the Water by Julio Rodriguez (below.) 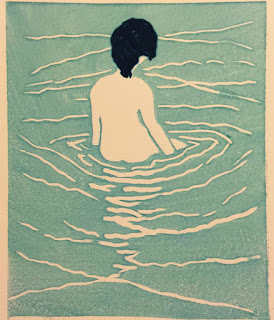 Again, two prints with many similarities: a single woman, seemingly alone, her back to the viewer looking out into gently rippling waters. Inevitably many prints of nudes include water seeing as bathing and sometimes swimming are activities done naked. When I look at these prints, I cannot help but imagine how the cool, moving water feels against my own feet and legs.

The difference between these two, as with the two prints I featured yesterday, is about the relationship between the figure and her setting. The first woman sits on the edge of a pool, arms crossed, a towel or blanket behind her. She seems to have already swam and is now quietly resting. She is more still, more dry, and more in her own head. The second woman is moving. Both prints feature ripples, but in the second the ripples are a consequence of the figure's movement and thus, they encircle her. She isn't in between events, she is part of the action.

Posted by Martha Knox at 7:37 PM No comments: 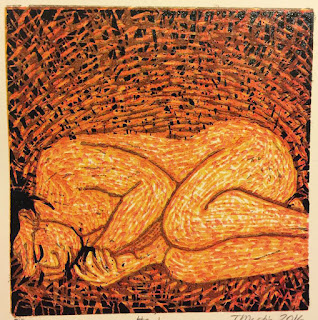 The theme for this exchange from Baren Forum was "Nudes", and the paper size was 8" x 8". I submitted #8 from my series of male nude white line woodcuts from last year. Certain themes and similar approaches to this challenge were employed by the artists who participated in this exchange, four of which I'll highlight in my posts about this exchange.

First: the fetal position
Featuring Heat by Theresa Martin (above) and NUDE (squared) by Preston Lawing (below.)

These were not the only two prints in this exchange that featured a curled up naked body. But I was particularly struck by the similarities and differences between these two.

Both are reductions in warm hues depicting women, their eyes closed, arms wrapped around themselves, knees pressed close together. And yet, the woman lying on the ground visibly radiates heat outward, while the woman seated on a hard floor appears to contain her warmth. The one above appears relaxed, perhaps merely curled up while sleeping. The other, upright, seems posed or contemplative. One is connected to the space she occupies, the other is detached. 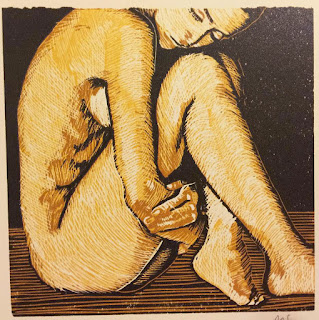 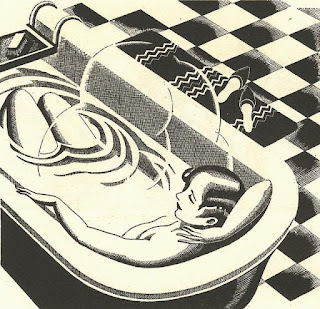 Never before has a bath felt so much like playing hopscotch.
Posted by Martha Knox at 9:51 PM 2 comments: 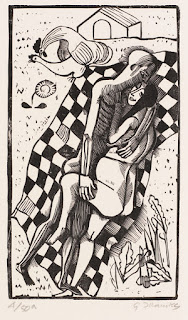 What else would they be doing on top of a checkered blanket, spread out on the ground under open skies and warm sun.
Posted by Martha Knox at 7:17 PM No comments:

I recently received the honor of being invited into a group exhibition featuring the work of a diverse group of women artists. The show went up at the start of last month and continues through the end of this month. I encourage anyone in the Philadelphia area to check it out before it comes down. (Here's a link to the Roger Lapelle Galleries website with information.) And for those who cannot see the exhibition in person, here is an excellent video which documents most of the work in the show with thoughtful commentary by the filmmaker John Thornton and the show's curator Jeanine Leclaire.

Posted by Martha Knox at 8:52 PM No comments:

Email ThisBlogThis!Share to TwitterShare to FacebookShare to Pinterest
Labels: Jeanine Leclaire, Martha Knox, Roger Lapelle, We Do What We Must 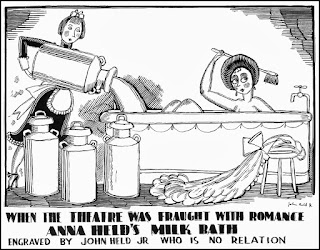 Earlier this year I wrote about John Held Jr.'s wonderful book of woodcuts illustrating the "The Saga of Frankie and Johnny." Held was known most for his illustrations of flappers for Vanity Fair and The New Yorker which captured the Jazz Age.

But Held's work that moves me the most are the rough engravings from the turn of the last century - the end of the Victorian era. Here he is known for illustrating some of the darkest aspects of humanity - drunkenness, lecherous misogyny, violence - with a sort of tenderness. Held often referred to himself in his illustrations as "that old sentimentalist." It wasn't that he was promoting or glorifying such vices, but rather, that he saw the humanity within the people carrying it out.

This print is of Anna Held, a tremendously famous actor and singer in her day. Sadly, her life was cut short in 1918 when she died at the age of 46. Anna Held had been a Broadway star and regarded as a war hero for her work entertaining troops on the front lines during World War I. That she passed away while still in the midst of a thriving career must have struck the public in a powerful way. This woodcut of John Held Jr,'s was published in 1930 and was meant to capture the nostalgia people felt for a recently bygone era - a time when it was still considered risque for a woman to show her legs. Though Anna Held - a performer known for her flirtatious performances - is depicted in a bath, the banality of the scene is emphasized by practical elements such as a scrub brush and giant jugs. A relative innocence comes across in the expressions on Anna Held and and her attendant's faces, who seem cheerful yet humdrum in their occupations.

This is in contrast to most of Anna Held's promotional photographs that directly confront viewers with a come-hither gaze.

Rest in peace, both of you talented (and unrelated) Helds. 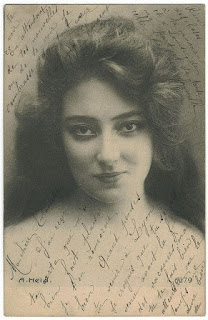