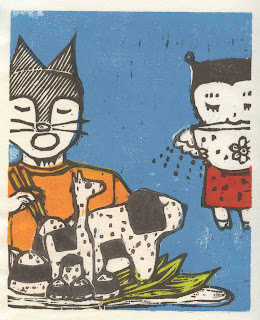 Image posted with the permission of the artist. More about Ayu Tomikawa and her art can be found at her Etsy Store.

The sounds of humming, slurping, and lips smacking run through my mind as I gaze at this image. Refreshing blue, fresh green, and juicy red and orange shapes bedazzle these figures as they chow down. Rice balls turn into speckled zoo animals, who will disappear down the open, oval mouth of cat-boy. Meanwhile, behind him a much stranger creature (caterpillar antennae, pig feet, butterfly wings) stands and eagerly drinks from her over-sized bowl. Are they costumed children or chimeras? Innocent diners or cannibalistic specters? I'm not sure, but I long to join them in their tasty feast.
Posted by Martha Knox at 8:30 PM No comments:

I'm trying my hand at some more illustration work. My mother has written a vampire novel based on Hamlet, and soon it will be available for sale for Kindle. An image of a skull with sharp, elongated canines seemed an obvious choice. When the final cover design is finished and the book goes to market, I will announce it on this blog. The image I'm using for the finished cover is actually a four-layer reduction in slightly different colors. I did this image as a one-of-a-kind extra because I wanted to see what just these two layers looked like in red and black. This print is available for purchase here.

Overall I'm pleased with this print. It is accurately drawn, detailed, and graphic enough to catch the eye, while at the same time the grain of the wood and the carved marks are prominently featured. I like how the vampire teeth don't jump out at you right away; at first glance it appears to simply be an illustration of a human skull.

I also like that this doesn't look like my typical work. I feel my style, with its bright colors, primitive aesthetic elements, and bizarre, sometimes silly or kitschy imagery, isn't a good fit with my mother's fiction. I knew I would have to try something different for these book covers (she has several novels which I hope to design covers for soon.)  I hope to create a series of woodcuts which are a little more subtle in color palette and purely mood-based than my fine art prints. 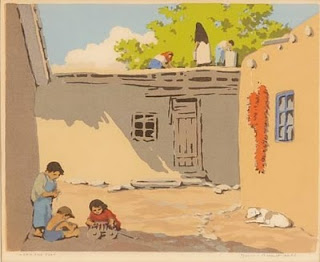 All lines and shapes direct the eye to these three children playing in the shadow of the house. Each is hunched over with intense interest and concentration on the task at hand.

On a roof above them, as almost an afterthought, three adults are engaged in their own work. The sun lights up their forms, beset by the lovely green of lush leaves.

As I contemplate these parallel figures, I am reminded of two famous statements: Maria Montessori's famous quote "Play is the work of the child." and the old adage of Confucius, "Choose a job you love, and you will never have to work a day in your life."

I am pleased that the children take center stage in this image. Too often their actions are dismissed, the spirit with which they do their work forgotten when the responsibilities of adulthood become essential aspects of our lives. As we strive to put food on the table, pay the bills, and save for a rainy day, we can forget that work can be fun and personally engaging and fulfilling, as well as productive. This image reminds me to take pleasure in the day to day challenges presented by both my career and daily chores.
Posted by Martha Knox at 7:31 PM No comments: 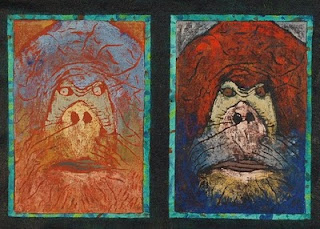 Image posted with the permission of the artist. More about Barbara Knight and her work can be found on her Etsy store.

We tend to generally think of primates, particularly monkeys, as cute, comical creatures. Associations with fierceness and intimidation comes into play more with the apes. Gorillas, orangutans, and chimps are often and mistakenly called monkeys, but they are not, and should not be labeled so. Their closer genetic and morphological connection to humanity can make us feel a greater kinship to them and take a more protective of stance with regard to these noble beasts. However, it can also enter them into the uncanny valley, giving them an eerie, sometimes frightening quality.

It is the latter, more ominous association that is subtly emphasized in these two portraits. In both, the orangutan's gaze is focused slightly to the left, just missing an eye-to-eye connection. Their nostrils flare, two wide-open ovals as large as their beady, more reptilian than human-like, eyes. Shades of cold blue contrasted with firey oranges instill a sense of danger. Their giant heads, cropped around their tiny faces, loom over us, too close for comfort. The size and shape of their heads and wildness of their unkempt manes leave no doubt that these are alpha males, or at least big mamas, prepared to tear apart any who challenge their territorial authority or seem to threaten their precious babes.

Orangutans are the most solitary of the great apes. Of all the great apes, they spend the least amount of time among their own kind, and are the most difficult to maintain in healthy captivity. These are deeply sensitive, intelligent creatures, but very much introverts who prefer to be left alone. At a distance, they are graceful, red acrobats, navigating the forests of Borneo with their long arms and strong grips. But up too close, and these lovely and mysterious "men of the trees" can become tremendous ogres of the most nightmarish and legendary tales.
Posted by Martha Knox at 2:22 PM No comments:

"The Turtle" by Eliza Draper Gardiner 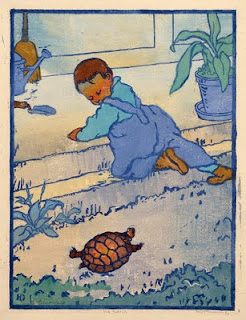 The air is still, and it is a quiet, cool-blue autumn day. The door to the kitchen has just slammed shut, and I move closer to the house, attracted to the sound of  water being drawn in the kitchen.

I clumsily crawl up two steps on short limbs and under the weight of my over-sized head. Baggy overalls and sleeves just get in my way. I notice you, and you notice me. You, also burdened by stubby limbs and the weight of your shell, lumber across the ground that I've just abandoned on my way up.
Posted by Martha Knox at 10:48 AM No comments: 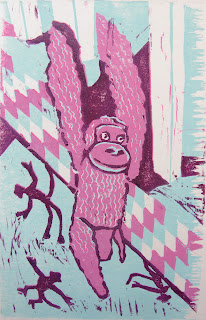 I never meant for things to go this way.
Posted by Martha Knox at 5:19 AM No comments: 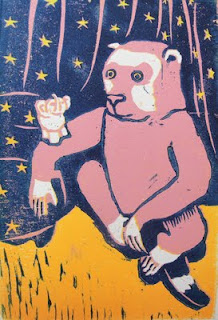 Now see, I've done a fantastic magic trick for you. I have shrunk this elephant down to the size of a chipmunk. Like a parrot, he's perch on my arm. See him raise his once great trunk and squeak in greeting. How clearly we glimpse the truth, so backward and bizarre to our natural inclinations; the monkey masters the giant.
Posted by Martha Knox at 5:49 AM No comments:

Email ThisBlogThis!Share to TwitterShare to FacebookShare to Pinterest
Labels: Martha, toying around, woodcut 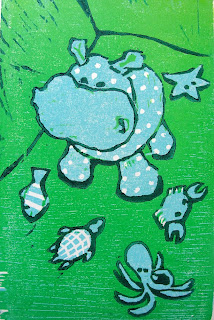 Woodcut (3 color reduction)
4" x 6"(image) 5.5" x 7.5" (paper)
Oil-based inks on Stonehenge paper
Edition of 4
Available for purchase here.
A hippo is staring at me in my living room.
His aquatic minions scattered all around.
What should be slimy is dry.
What should be sharp is soft.
What should be grey and wrinkled is smooth, powdery-blue and covered with happy, evenly-spaced polka dots.
What are these creatures doing on my sofa?
Posted by Martha Knox at 9:23 AM No comments: 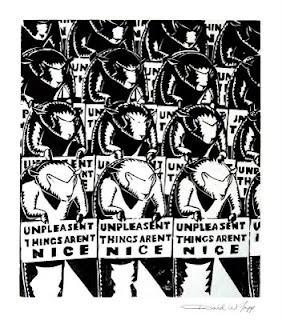 Image posted with the permission of the artist. More of David W. Tripp's prints and other artwork can be learned about, viewed, and purchased on his website here.

This is the sort of image that, due to its graphic style, at first glance seems as if it will be easy to "get", perhaps propaganda for a cause or clever one-liner. But it's much weirder and more challenging than that. This is, after all, art.

Identical figures seem to march in step, reminiscent of a disciplined military force, implying some powerful leadership and strict code of conformity. They form a solid, intimidating wall, with sharp spikes of texture and shadows. At first, they seem an ominous force to contend with.

But, but... they're cute, little sheep! Even in their large numbers and harsh, dramatic lighting, they are undeniably those fuzzy, adorable creatures known for their gentle demeanor. That's why we so often encounter sheep in petting zoos.

The humor is further emphasized, and more questions are raised by the signs the sheep carry. The message, "UNPLEASENT THINGS ARENT NICE" is so obvious and vague (not to mention misspelled), that it is meaningless. It is kind of an everyman of slogans, the type often seen on bumper stickers or handmade signs in protests, which communicate nothing except to those who are in the know.

The image reminds me of a great dilemma for any would-be iconoclast, the black sheep who dares to question the status quo, and then longs to change things for the better. As an individual of average means, one person's efforts might be totally useless. But join a movement, and suddenly that same individual's efforts, though still small, can become effective. The problem? The group can never reflect the sophistication, the thoughtfulness, the unique vision of the individual. Journalists will catch on film or in writing the most radical sentiments (and worst misspellings), and suddenly every environmentalist is a violent thug who cares more about trees than the lives and safety of loggers; every tea-party supporter is a racist who thinks President Obama is both a Nazi and a communist. Worse yet, membership in a movement can create an echo-chamber. Extended immersion and isolation from other points of view slowly pushes opinions to the extremes. Eventually that which sounds perfectly obvious and reasonable to anyone in the know, sounds positively ludicrousness or incoherent to anyone else. The movement becomes, for all practical purposes, an army of slightly-scary, but mostly silly nutjobs. He or she who was once a black sheep with thoughtful and provoking ideas steps into the light as just another indistinguishable member of the herd.

That said, for better or for worse, there is power in numbers.

Posted by Martha Knox at 7:50 PM No comments: