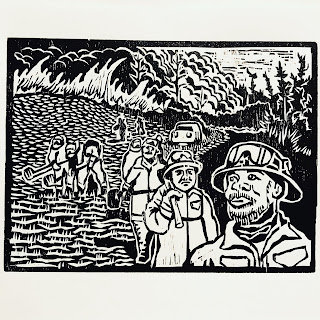 This is the start of a new book project: Wages U.S.A. It's partially inspired by Helen West Heller's Woodcuts U.S.A., which I wrote about 5 years ago on this blog. Mine is going to be a series of 36 prints depicting Americans engaged in various occupations.

The prints will be separated into 3 sections, 1. No Wage, 2. Low Wage, 3. Living Wage. This print would go in the second section as it illustrates prison inmates doing paid work, but they are paid considerably less than minimum wage for their labor. Convicts have worked as firefighters in California for decades, often part of emergency response teams.

Posted by Martha Knox at 7:59 PM No comments: