Sketchbook Sunday: Rabbits at the Wagner 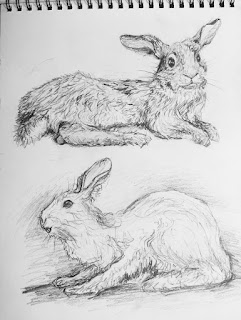 More Wagner taxidermy. They do manage to be kind of cute, but much like their friend the Longtail Weasel I sketched last month, these guys look like they've been dead a while.
Posted by Martha Knox at 7:12 AM No comments: 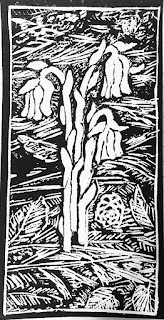 Posted by Martha Knox at 9:25 PM No comments: 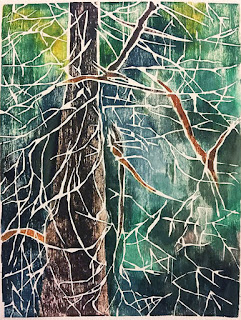 I'm really happy with this. This open, airy approach is one I plan to develop with my white line woodcuts in response to direction observations outdoors.
Posted by Martha Knox at 7:27 PM No comments: 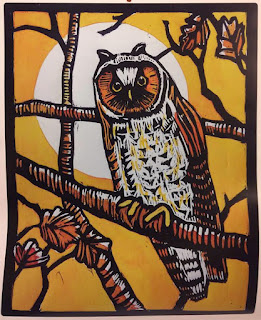 This image is from a new calendar that I excitedly purchased for 2017. It features 12 sharp and colorful block prints of birds by Molly Hashimoto. The artist wrote about its release on her blog earlier this year.

Although I will miss my Gustave Baumann calendar. (Both were published by Pomegranate, a small press I highly recommend for art calendars), I am thrilled to have have this gem hanging in my kitchen for a year.

All twelve of the prints in the calendar are stunning, but I just had to feature the one owl. Beyond the obvious reasons, the intense gaze and highlights in the eyes of this autumn-colored specimen are captivating.

Happy Winter Solstice, my faithful readers and lovers of woodcuts. Sleep well as our nocturnal cousins revel in the extended darkness of this longest night.
Posted by Martha Knox at 8:56 PM No comments: 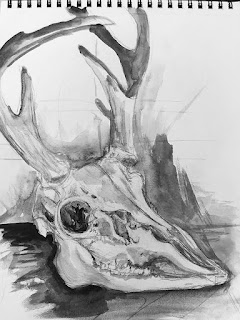 I'm not thrilled with this (proportions are screwed up), but I've been so busy with work and holiday season stuff it is literally the only thing I did in my sketchbook this week. Going back to the Wagner to draw again tomorrow - hopefully do something better. At least I'm keeping my hand moving, which is the point.
Posted by Martha Knox at 7:41 PM No comments: 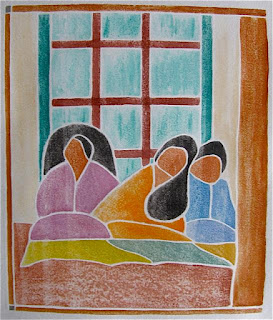 These are both white line woodcuts. The first is A Day at the Plaza by Peter Michael Martin and the second is The Days are Drawing In by Ray Heus. 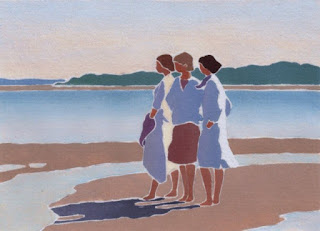 Three hover over
That which has collapsed
Flat on the
Table
Sand
Three look out
Chins up
Three searching souls
Connected to each other and
The world beyond.

This is my latest white line woodcut. I like the carved drawing, and I'm mostly satisfied with the top portion of the print (detail) but I need to work out some issues with the green. Also, I don't like how it looks on the Hosho paper and I'm going to try next with Stonehenge for a more crisp appearance and to hopefully get more of the subtle woodgrain showing. 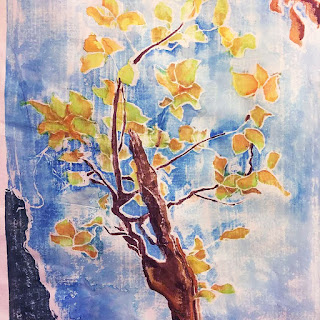 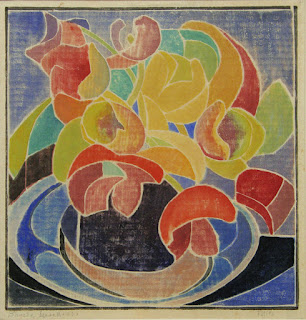 Had to post one more Blanche Lazzell woodcut. (If you'd like to read more about this truly accomplished, American artist, click here.) The first three this week were landscapes, but this still life really excited me today.

Delicious fragrance
Blossoms like open fruits or
Red clouds over seas
Posted by Martha Knox at 7:08 PM No comments: 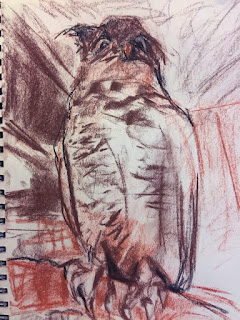 There's this taxidermy owl at the Wagner Free Institute for Science that is so old and distorted in the best possible way. The crooked, downward gaze is utterly ghoulish. This sketch captures a little something of it. 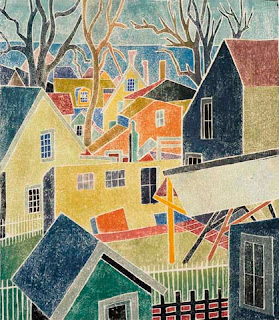 I first saw this wonderful white line woodcut on the cover of the book Blanche Lazzell and the Color Woodcut - a book that presents a rich selection of reproductions of the artist's work. Many artists have been drawn to draw, paint, print, or photograph townscapes such as these that present a layering of architectural structures with the trees and other larger landscape elements that are interwoven into the scene. The uneven rhythm of the rows of walls and roofs is not only lyrically pleasing and interesting; it also unifies a place while maintaining the unique individuality of each abode, and that is comforting.
Posted by Martha Knox at 3:24 PM No comments: 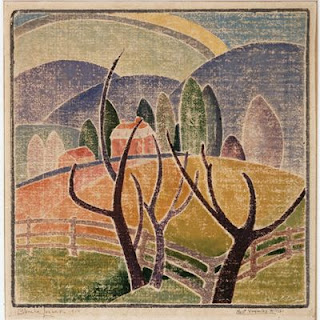 I'm looking at a lot of Blanche Lazzell again this week because I'm interested in venturing back into white line woodcuts and specifically landscapes. Although as of yet I've only created one true landscape using this technique that doesn't also feature figures.

I am amazed by Lazzell's ability to make her landscapes somehow fantastical and yet also warm and familiar. The misty textures combine so elegantly with the motley of color choices. The bands of color that arch across the skies in so many of her landscapes are an especially intriguing decision for both describing the rich atmosphere and visually connecting the land formations that form the dynamic horizon with the otherwise static sky.
Posted by Martha Knox at 8:40 AM No comments:

"The Monongahela at Morgantown" by Blanche Lazzell 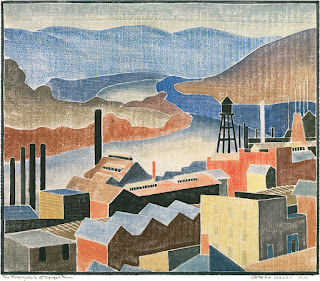 I consider autumn to be the most beautiful time of year. Cool and crisp, yes, but most of all it is the rust-colored foliage set against the blue beyond that captures my attention. I feel I am flying over a world set in balance.
Posted by Martha Knox at 8:49 AM No comments: 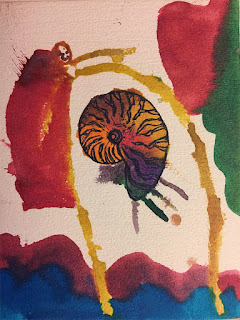 I often print extra copies of my woodcuts and linocuts for my kids to color. I have a bunch of extra nautilus shell linocuts I've printed to practice drawing the protagonists in my new book project. Here's a couple I let my daughters finish. 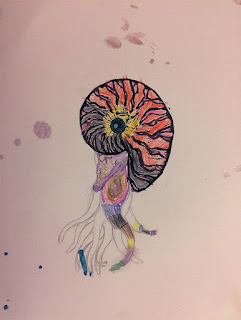 Posted by Martha Knox at 7:17 PM No comments: