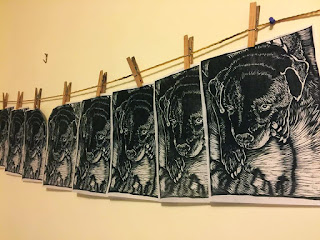 To start out the new year I've decided to delve into the recent past by finally doing an edition of Gus, a woodcut I created in 2012, but never went beyond proofing. I resurrected this woodcut for two reasons.

First, while setting up my new studio (I moved a month ago) I found this block and liked it much better than when I first carved it. Sometimes I feel overly disappointed in a first proof, especially if I have a specific idea in my head of how I want an image to turn out, and in this case I had. Now that original vision is far enough away that I can enjoy what actually came out of this block.
Incidentally, I also realized that the size of this block was just perfect for Baren exchange #67, which is due February 1st.

My second reason for revisiting Gus is that I'm interested in starting a series called Dogs A-Z, which would be a sequel to my Cats A-Z series. As with the cat alphabet book, this would be a collection of black and white woodcuts. I figured finally giving Gus his own edition would help get me into the headspace. Although honestly, I don't quite yet feel I'm there, and will probably have to get some other ideas out of my system first.
Posted by Martha Knox at 7:58 PM No comments: 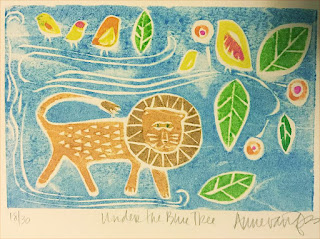 This first print is Under the Blue Tree by Anne van Oppen. There is something just so satisfying about this whimsical, airy little print of a lion standing under an elongated tree branch laden with oversized leaves and plump and sunny birds. I am planning to frame it and hang it in my kitchen to cheer me up while I cook. 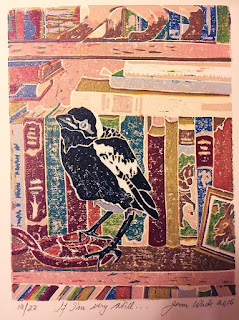 My next favorite is If I'm very still... by Jenn White. I enjoyed this image as soon as I laid eyes on it simply because of the interplay of shapes and colors. Then I examined the actual imagery, realized the wonderful tension of the moment (notice the cropped paws on the higher shelf) as well as the suggestive details found in the books and framed picture of the rabbit, and I just fell in love. Looking at this print reminds me of how I feel engrossed in bird watching or reading Walden. I should add that I'm completely impressed by the artist for making a reduction print with 13 colors for an exchange! 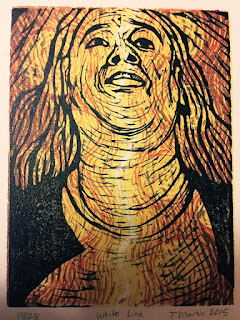 And last but not least I am completely enamored by the print White Line by Theresa Martin. I appreciate this creative interpretation of the technical challenge. I have a difficult time putting into words the response this image evokes in me. The best I can do for now is to share that the literal white line that wriggles up the center of this portrait immediately brought to my mind the Flamenco dancing of Antonio el Pipa accompanied by the earthy, soulful voice of his Aunt Juana. (Check out one of their performances below.) 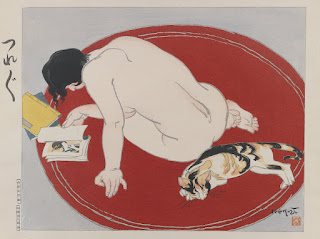 Hunched over and engrossed in pictures on the floor that caught my attention after the bath. I am like my cat, curled up on a small, red island of now.
Posted by Martha Knox at 7:39 PM No comments:

A Winter Scene by F.E. 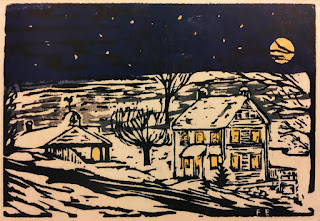 A few years ago one of my middle school students gave me a framed copy of this lovely 6" x 4" print of a winter scene. She told me that her grandfather had made it (it is only signed by the initials "FE" carved into the image), and she thought I would enjoy it because I am a printmaker.

She was right. Over the years this gem has occupied various places of honor in my homes. I just moved and it is currently on the desk in my studio where I am typing this blog post.

What I love best about this print is the cheery yellow that lights up the windows in the house and moon as, well as the confident swathe of deep, dark blue that fills the night sky. Oftentimes a black and white woodcut stands well enough on its own and color only flattens not only the sense of space, but the emotional depth of an image. But here I find that the color lends volume to the snow that covers the ground and structures. The freezing temperatures are, too, emphasized by contrast to the warming yellow light. And that sky, by virtue of its distinct hue (if not distinct value) seems all that much more distant and vast.

Winter is humbling.
Posted by Martha Knox at 7:58 PM No comments: 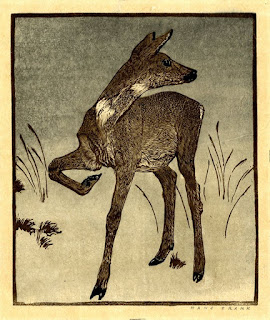 For anyone curious to learn more about the artist Hans Frank, click here.

The young deer sharply turns, points his ears toward the sound. He hears things we don't. Or perhaps more accurately, most of the time, hears things we don't bother to notice. Oh big brain, monkey mind, this great eraser of sights and sounds no longer of any practical use or obvious consequence! What symphonies will never be revealed to me?

I do not envy the deer, this overgrown, ennobled forest rat, despite his large ears, graceful leaps and penetrating gaze. I do not know what it is to be a deer. I can no longer listen to his music than he can comprehend mine.
Posted by Martha Knox at 10:09 PM 1 comment: 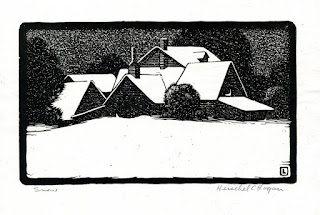 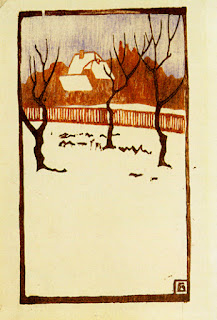 The backdrop of structures is washed out in a haze of chilled atmosphere. Living beings, tall and majestic, appear rigid and frail. But there is heat within those structures, and the tall trees are deeply rooted to the earth. As with all things, this winter will pass, even if this moment feels frozen in time.
Posted by Martha Knox at 11:36 AM No comments:

Image posted with the permission of the artist. Jenny Pope's website can be visited here. I wrote about another of her prints inspired by nature - "Great Lakes Basin" - in 2012.

The deep oceans of today seem exotic enough with their plethora of wiggling, wandering, swimming, and floating creatures. But here is a period from hundreds of millions of years ago that bore the once flourishing, now extinct ammonites that so capture my fascination. The cephalopods depicted here in Jenny Pope's print appear to be orthocerida, a more hulking predecessor of the ammonites, with their heavy, spear-like shells. It might not be as lyrical as the spiral helmet of a ammonite or nautilus, but it is every bit as impressive. Simpler times, perhaps.

I love the cropping and colors in this print best. The sodden yellow, often muddied or interrupted by mossy greens and neutral browns, warmly glows against a pastel emerald backdrop. This is such a fantastic, alien city. Alas, my vision is only allotted a small slice of the hustle and bustle in this ancient and aquatic circle of life.

"Bird Island I" by Eve Stockton 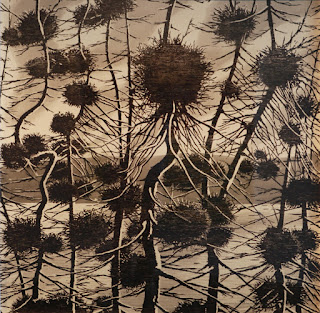 All around this place is watery abyss.We have ripped these arboreal bodies bare and built our nests in their spindly, open arms. Our young will hatch and shriek for sustenance, and we will travel back and forth, over and over to bring it to them. These nests are like aging dandelion blossoms waiting for the last of their tuffed seeds to float away.
Posted by Martha Knox at 9:15 PM No comments: 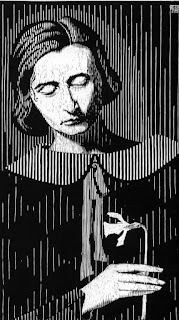 Faces, like the lovely fragrance of flowers in spring, can be lost in the hum. But for these few moments, the curtains have been drawn, the vibrations slowed to a quiet pace, so as to gaze at her face, so clear and bright, as she contemplates the curves in an daffodil.
Posted by Martha Knox at 3:10 PM No comments:

"The Flash-Eyed Mother" by Jacob Afolabi 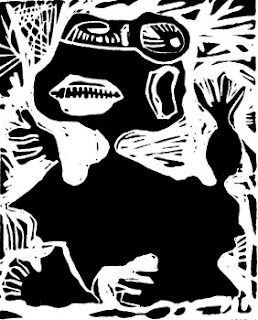 There was so much going on that we didn't typically notice the way she looked at us. This time there was one eye bulging, the other dizzy and distracted by some internal stream of thought. The cracks in her dry lips appeared almost as gritted teeth. Her arm's reach was short, but her hands, huge. With enormous feet she took quick, abbreviated steps. For a moment she was almost funny to watch. And then that moment passed.
Posted by Martha Knox at 10:02 PM No comments: 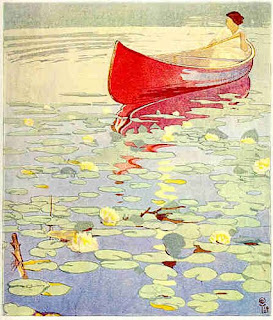 Ripples of milky sun interrupt the mottled sheet. A sharp shard of red tears through them both. Aboard the canoe, a woman softly steers. Her body has melted into the water, leaving her head an elevated, ghostly observer.

I am alone here now, listening to the wind and sloshing waters. Some of these sounds I control, but mostly they are beyond my influence. I look down at my feet on the floor and I feel large. But deep down in the pit of my soul I feel my smallness.
Posted by Martha Knox at 8:06 PM 1 comment: