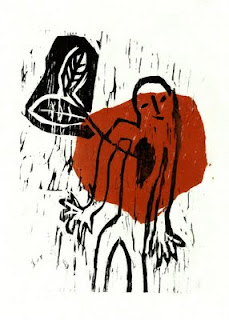 Image posted with the permission of the artist. More about Sada (Hyun Mi Park) and her expressive, imaginative works can be viewed at her website and Etsy store.
As I look at this image, I can practically feel the chisel against the wood block, carving away all except the contour lines of the universal figure. A woodcut that really looks like a woodcut.
Though seemingly primitive, there is something profoundly artful about how much expressive gesture is captured by so few lines. The figure almost seems to smile, head cocked coyly and he/she gazes toward the viewer. The arm and fingers on one side seem to wiggle while the other pulls down, fingers flared out. One hip juts out, putting all weight on the other side. The stem or string which connects the pair of leaves to what seems to be an opening in the figure's chest bows slightly, giving just enough slack to imply buoyancy.
The use of offset, earthy-red color (it almost seems a puddle of blood around the opening of the chest) and expressive mark-making remind me a bit of the woodcuts of German expressionist Ernst Kirchner.
The image is playful and strange. It is the sort of image that grabs my attention right away, then leaves me to ponder the unfinished sentence that is its title. The sort of image that causes me to notice being in my own skin and feel sometimes a comforting, and sometimes disconcerting connection to the larger human family, and the even larger family of all living things. It is the same response I have to many works of art found in museums of archeology and anthropology, created by a variety of indigenous peoples from many time and places around the world. In the moments I look at this image, I am fully aware of being both large and small.
Posted by Martha Knox at 8:50 PM 2 comments: 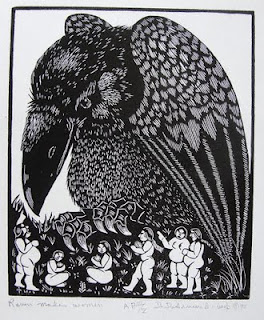 Dale de Armond was a Inuit-American artist who died in 2006 at the ripe old age of 92. She was an accomplished artist, best known for her wood engravings illustrating Inuit folklore. A large collection of her illustrations were published in Raven: A Collection of Woodcuts by Dale de Armond.

This image is one example from that body of work. In Inuit mythology, the world's creator is a trickster deity called Raven (because he often takes on the form of a black bird.) Similar to the Christian Biblical myth of Adam and Eve, woman is created after man to be his companion. As Raven goes about creating more plants and animals to make the world more interesting, beautiful, useful, and dangerous for man, man and woman begin producing children immediately, and their children mature to adulthood within a matter of three days so as to quickly populate the earth. Just as with Adam and Eve, incest must be assumed, at least at first.

Here the ominous bird, with its huge, sharp beak and claws towers over a gathering of pregnant and naked gatherers. The women seem to move about nimbly, despite their voluptuous bodies, and are quite focused on their tasks. As frightening as Raven's form is in comparison to these little women, he is hunched over in a docile pose, intensely listening to one of the women. She speaks to him standing up straight with her finger pointed in his direction. I guess she's not shy about telling a powerful deity what's on her mind. I imagine she's probably telling him to do something, given the assertiveness of her gesture and seeing as he's the creator of the world. In this image, nature dwarfs, but does not dominate mankind. And these busy women are unintimidated by their own smallness. They are focused on life, and work, and getting what they need.

I would love to see this print in person. It's a small, intimate work, only 5" x 6". How wonderful it would be to hold the image in my hands, gaze through the little window, and sink into de Armond's world of Raven and the first of womankind.
Posted by Martha Knox at 11:59 AM No comments: 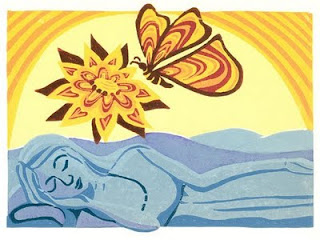 Image used with the artist's permission. More of Katka's work can be viewed on her website, blog, and Etsy store.
This is one of those images that is difficult to write about because of its simplicity. I am drawn to meditate on the image more out of a immediate, emotional response to the whole picture, opposed to out of a more cerebral desire to explore complex details. It reminds me of the difficulty I have with putting into words how I am deeply moved by many Mark Rothko paintings. On its face, this image is easy to describe: a nondescript sleeping woman across the bottom third of the composition in several shades of blue, contrasted with a striped arch behind a butterfly and flower, all in shades of warm yellow-browns. The longer I look at this image, the more I detach from the literal subject, sink into the abstract qualities. I enjoy the looseness of how everything is described, how the lines and shadows of the sleeping woman and bedding are suggestive of landscape, and the arch behind her isn't quite symmetrical, but rather, it leans to the left as if pulled by the butterfly. The colors, too, are quite vivid, almost cheery.
When I come back to the subject, it seems that the woman, the butterfly, the flower, and arch are much more than they seem. The subject of her dream is so mundane: a butterfly approaching a flower. Yet butterflies and flowers have always captivated both the human eye and imagination. There are profound reasons for this: softness, delicacy, flashy fluttering, resemblance to female sex organs, and simply gorgeous symmetry. There seems to be something achingly feminine about these two, lovely organisms, which might begin to explain why almost every little girl (and many boys) with a crayon-in-hand tends to draw them by the truckload.
There is no conflict in this image, and yet it isn't just pretty. It is rather like a butterfly or flower, just as captivating for its mystery as for its beauty.
Posted by Martha Knox at 7:52 PM 1 comment: 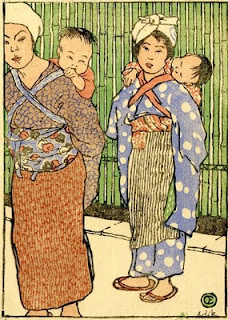 I recently discovered the wonderful woodcuts of Emil Orlik through Clive Christy's blog Art and the Aesthete. Check out that article here.

I was especially drawn to this image of two mothers and their infants. Delicate contour lines sensitively describe the texture of clothing and volume of the warm bodies underneath. The women's arms and hands disappear behind them in support while fabric X's pull tight across their chests. I feel the weight on their backs. One woman heads out of the frame, slightly bent forward. Her baby is awake, eyes scoping out his environment. In contrast, the aim of his mother's expression - alert eyes and tight mouth - signals a clear destination. The other woman captures the viewer's attention more-so in that she stands still, gazing directly back at us. Her expression is soft, content, and a little tired. She and we take brief note of her experience of this moment in time, as her baby's head sleepily slumps over her shoulder. In a second or two, the moment will have passed. She will turn away from us and, like the first woman, resume a quiet and constant movement forward.
Posted by Martha Knox at 10:01 AM No comments: