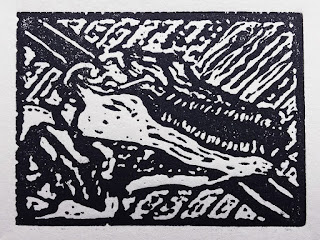 This is my first "wood" engraving. That's in quotations because I didn't actually engrave wood. Instead I engraved a Resingrave block, a product created to be used in the same way as end grain boxwood, which is the material traditionally used in wood engraving. The primary reason to use Resingrave is the cost is much less. (I purchased it from McClains.) Anyway, I'm not sure how I feel about either the experience or the final product yet other than that I enjoy appearance of the brittle mark-making.

I also didn't use traditional wood engraving tools. Instead I used a dremel. This decision was partially made because of the cost of investing in engraving tools (particularly since I'm just trying out this method for now) and partially because my hands have been hurting more and more frequently after carving and printing. I found using the dremel to feel very similar to using a wood burner, which is to say I had to move it across the surface slowly, apply varying amount of pressure, and the resistance encountered was surprisingly varied despite the Resingrave's uniformity. 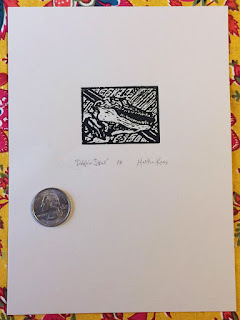