With Cats On Our Laps

This is a self portrait holding my cat Aubrey. I got the idea and began work on it after doing a little white line portrait of myself last September. I'm gearing up for my next book project, which will be all white line woodcuts.

The title, Bug On the Ceiling, is meant to be bit humorous. Certain elements of this print point toward religious imagery, specifically alluding to Mary chosen by God to mother the Christ-child. But it's not a baby she holds, it's a cat. What seems a light on the woman's head is wood grain, and all other representational imagery is plant-life, distinctly earth-bound. Finally, there's the title, letting the viewer in on the totally mundane of reasons why she's looking up.

I'm not mocking religious sentiment so much as I'm attempting to elevate the every-day. 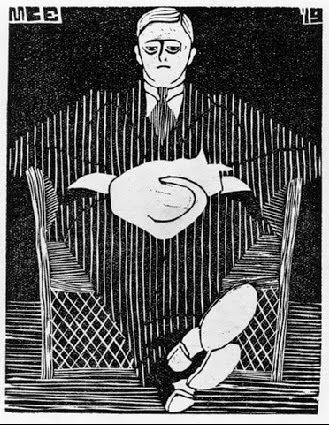 M.C. Escher made this woodcut, Seated Man With Cat On His Lap in 1919. In it, the subject is just as centralized in the composition, but he doesn't look up; he confronts his viewers. Boy that guy can look deadly serious even with a big curled-up cat in his lap. Reminds me of Cardinal Richelieu, who used to sign death warrants while his cats sat on his lap. (Richelieu had 14 cats, including one named Ludovic the Cruel.)

I love how this man's suit and chair just sort of melt into the flatness. His head practically floats. The Prophet Mohammed is said to have once cut off a piece of his clothing rather than disturb his pet cat who was sleeping on it. Perhaps there is something transcendent about the companionship of these domesticated carnivores, who have not the loyalty of dogs, nor the nobility of horses. We initially kept them to kill vermin in our granaries. Now they occupy the most intimate of spaces in our homes, even anchoring down our very bodies.

I keep making woodcuts. Different kinds of woodcuts. I make books now so I can make a whole series of woodcuts on a theme or to tell a story. Another artist friend of mine recently said to me, "Not everything needs to be a woodcut." But almost everything kind of does need to be woodcut! Because I haven't hit a wall with that. I keep finding new avenues to explore with it. It's only the same old thing over and over again if I let it be. I must stay in this small place I currently occupy; dig deeper to find whole new layers of sediment; look longer through the keyhole to find what few others have noticed.

Lots of times I hear Peggy Lee's voice in my head, singing, Is this all there is? Yeah, this is all there is. And at least most days, it's enough.
Posted by Martha Knox at 11:01 AM