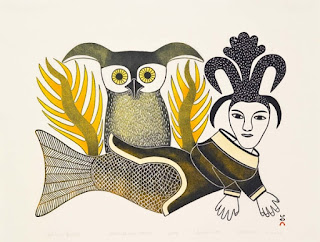 So far on this blog I have written about prints made by carving a block of wood, with the occasional linocut or wood engraving because those types of relief printmaking have traditionally been grouped together under the label of "woodcuts". However, in this post I'm writing about a technique of relief printmaking I had previously not encountered. Kenojuak Ashevak's relief prints are made from stone. This Inuit artist passed away in January of this year after decades of prolific art-making that included not only stonecut prints, but drawings, paintings, etchings, and even stained glass. The New York Times ran a thorough article about her life and career.

Kenojuak Ashevak is known best for her images of birds, especially owls. I am firmly convinced that much of people's fascination with owls is that with their frontal facing eyes (evolved for zeroing in on potential prey) make them seem more human. Here, an owl is portrayed alongside the mythological figure Talelayu. In Inuit mythology, Talelayu is a goddess who rules over the sea and creatures who live there. And so I am quizzocally drawn to this image. Why is an animal of the sky paired with a goddess of the sea? The owl's overgrown ears arch over stems of seaweed that wiggle like flames, while Talelayu's headdress reads like a blooming flower. Land and sea have come together and harmoniously stare out at us viewers. What are they thinking, so serene in their odd juxtaposition? What should we take from this meeting?
Posted by Martha Knox at 8:34 PM