"Alice and the Caterpillar" 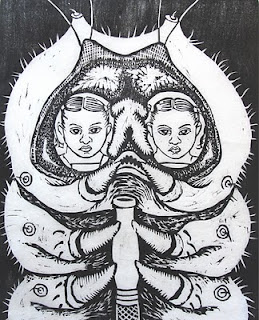 8" x 10" (image) 9" x 12.5" (paper)
Oil based ink on Kozo paper
Available for purchase here.
I created this woodcut illustration for paragraph #111 of Alice's Adventures in Wonderland as part of the Alice Project/What is the Use of A Book Without Pictures. This is a project where a variety of artists illustrate Lewis Carroll's famous children's tale paragraph by paragraph. Black and white was a requirement, although I also have also done some hand-colored versions on Rives BFK.
Paragraph #111 goes as follows:
Alice thought she might as well wait, as she had nothing else to do, and perhaps after all it might tell her something worth hearing. For some minutes it puffed away without speaking, but at last it unfolded its arms, took the hookah out of its mouth again and said, ‘So you think you’re changed, do you?’
I recently re-read Alice's Adventures in Wonderland out loud to my infant daughter, and was struck by how rude and oblivious to potential dangers Alice can sometimes be. Even though it is the caterpillar speaking in this paragraph, I wanted to show the anger Alice feels toward him, so I decided on a double reflection of her expression in the caterpillar's huge eyes. Traditionally the caterpillar's face is rather anthropomorphized in illustrations. After all, he is engaged in pretty human activities: smoking and speaking. But re-reading the stories, I visualized a frightening beast. All insects, even sort-of-cute ones such as caterpillars are creepy things, and the thought of a human-sized one (relative to the shrunken Alice) was truly terrifying. So I decided to go with a more true-to-life rendering of the caterpillar with a face that hardly reads as one.
Posted by Martha Knox at 11:32 AM