January 7 marked a year since the passing of my favorite woodcut artist, Stephen Huneck. Huneck was best known for his woodcuts and wood carvings of dogs and his series of children's books featuring his black lab Sally. So great was his love for dogs that he even built a whimsical chapel for pet owners to mourn their lost critters on Dog Mountain in Vermont. Learn all about Huneck, his life and work, and view and/or purchase artwork on his official website, maintained by his widow Gwen. 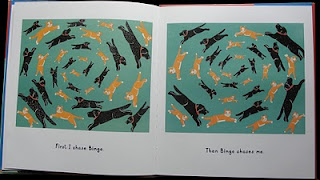 I discovered Huneck's work five years ago when I took my cat to a new veterinarian. In the waiting room a large children's book titled Sally Goes to the Vet sat on a low table. Intrigued by the cover image, I picked it up and looked inside. The illustrations engaged my eye in the way Matisse's cutouts and Jessie Oonark's screenprints do: colorful, flat shapes, many with delightfully naive textures, arranged in the most direct manner for telling the story and without regard to realistic perspective or physics. My excitement peaked as I reached the double page spread with the text "First I chase Bingo. Then Bingo chases me." To depict the this game between Sally the dog and Bingo the cat, Huneck simply created a spiral of the animals' repeated images, decreasing in size toward the center and arranged over a plain green backdrop. Beyond being decoratively quite beautiful, this way of telling these minutes in the story felt so fresh and true. In such a chase, neither character would notice furniture or other environmental details, nor would they notice time. They would be in the moment, everything happening furiously and joyfully at once. 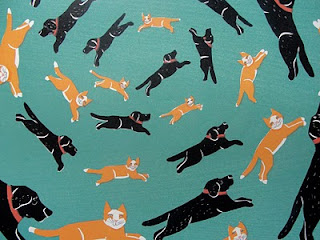 As I enjoyed these images for the first time, I suddenly noticed the subtle woodgrain in the green backdrop. It hadn't occurred to me that the illustrations could be woodcuts since I know what a laborious process that is, but here was the proof! What's more, in the double page spread of Sally and Bingo chasing each other, there were slight differences in the grain and positions of the figures. Instead of using a mirror image of a single image, Huneck had made an entirely new print of the animals spiraling in the opposite direction. Now that's dedication to one's craft!
This past holiday season my husband's brother gave me all of Huneck's published books. I've rarely been more grateful for a gift. While my daughter is still too young to enjoy them, I have been enthralled for weeks just leafing through the images. In the years ahead I look forward to reading them to her, as well as the many other children in my life. 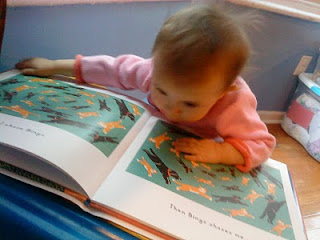