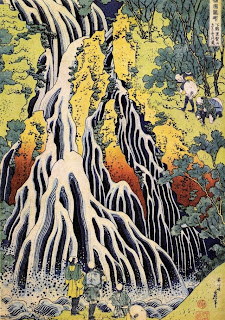 Hokusai is most famous for his prints of nature (Thirty Six Views of Mount Fuju and the Great Wave of Kanagawa) and what I love most about these and similar works is how exquisitely he renders the natural world, as well as how powerful nature is depicted in comparison humankind. In this sense these works remind me of the cave paintings of Lascaux where elegantly drawn images of stags and bison tower over stick-figure human hunters.

The first time I saw this picture I read the waterfall as the roots of some humongous tree, even though I knew from the color and my familiarity with the style of Japanese woodcuts that it was meant to represent falling water. I had to pull out an old travel photo album to look at a snapshot I took of my husband in front of Ta Prohm - a temple in Cambodia overgrown by gigantic tree roots. In the photo the temple's entrances are dwarfed by slithering, bulbous roots, many thicker than my husband's legs. 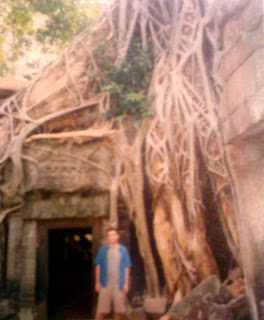 The lines of Hokusai's falling streams are just so sharp that at best they reads as thick ropes of ice. That is, until the eye reaches the bottom of the image where the frozen-looking streams finally meet the ground and sizzle up as small waves and mist. The people at the bottom look up, and the people at the top look down, probably at each other, although their respective gazes keep the eye moving up and down the real subject of the piece, and emphasize the waterfall's substantial height. Unlike the waterfall itself, the people's gestures suggest movement. Though the waterfall moves fast, it will be there much longer than them, and the streams' frozen appearance almost seems intended to underscore that deeper truth.
Posted by Martha Knox at 7:34 PM