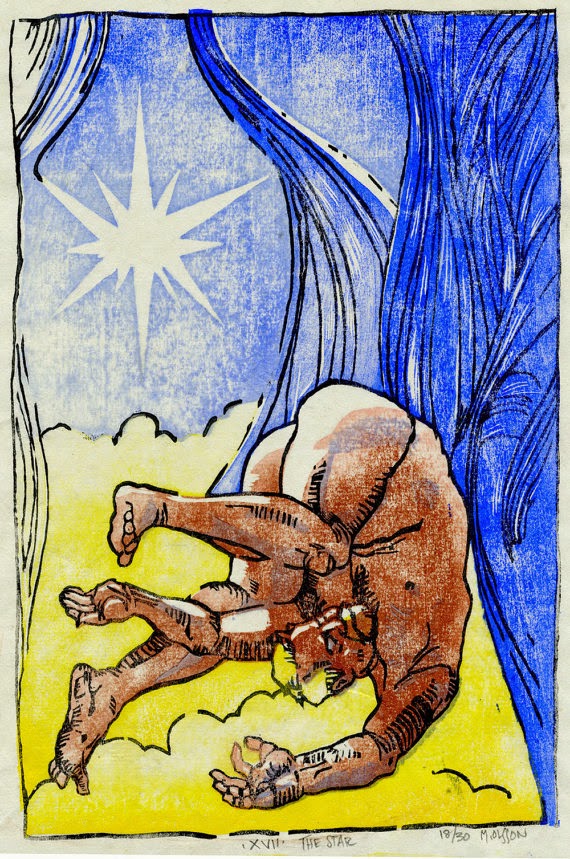 Image posted with the permission of the artist. Mats Olsson creates sublime drawings and prints of heavy-set, male nudes. On his online store Ponderous Man's Profile he says he doesn't know why he chooses the imagery he chooses. I say who needs an explanation from the artist when the work speaks so well for itself?

That said, I'll take a crack at interpretation. After all, this blog is called Words on Woodcuts.

This image immediately struck me because the position of the man's body makes it seem as if he has just crash landed in an uncomfortable position, and yet he is positioned on a puffy cloud and the closed-eyes expression on his face is serene. The absence of any shadow under his form contributes to the impression that he is floating or falling. The blue objects to the sides of the cloud remind me of pouring water, translucent curtains, and flower petals, all wonderful to touch. The combination of vivid yellow and blue add to the sense of a lighter mood. I am reminded of the paintings of Marc Chagall, who used impossibly upside-down heads and vibrant colors to convey different psychological states, such as joy, awe, or falling in love.

This image is intended to illustrate the Tarot card The Star, which is most typically illustrated with a naked woman pouring two jugs of water while a star shines in the sky above her. Variations, including those which feature a male figure, have appeared in some artist's designs. The meaning of the card falls into the range of hope, promise, assurance, and renewal.

I feel this man's life has just been turned topsy turvy. He is in a new and unfamiliar place, naked, stripped of all he owns. Because he is obviously middle-aged, this image serves as a reminder: profound new beginnings can start at any age. And while such tumultuous change can be difficult, it is also liberating.