"T is the Tiger" by Christopher Wormell 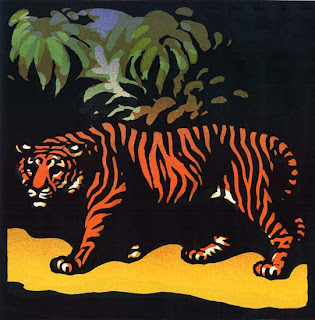 Since I finished the prints for my own alphabet book, I decided to write about a print from another artist's alphabet book. Christopher Wormell, a highly prolific English printmaker, published numerous books, several of which were made up of a series of small prints featuring animals. Such titles include The Alphabet of Animals, Teeth, Tails and Tentacles, and Mice, Morals, and Monkey Business.

Orange stripes slither out of the darkness like ribbons of ominous light. A honey-colored puddle wriggles under the steady pace of the tiger's steps. All that is lit is of a bright and cheerful hue, but that really only serves to heighten the drama of the darkness and all the possible danger hidden in those shadows. Danger, such as eyes focused on prey, and sharp teeth and claws, poised to emerge.
Posted by Martha Knox at 7:17 AM