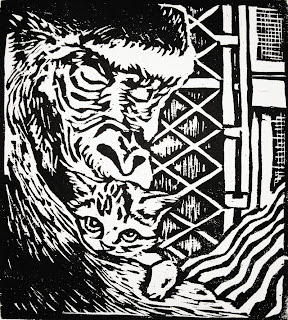 This is page one of an alphabet book of cats I'm writing and illustrating. Each page will feature a cat whose name starts with a letter of the alphabet. Haven't decided if the final book will be in color or keep it in black and white. I'm planning to play around with watercolors on my proofs of this print tomorrow.

Being adopted, he looks nothing like his mother. But when she holds him, he feels comforted by her fur and the heat of her body against his. He can tell from her long gazes and gentle caresses that she loves him. Even when a baby is chosen from a litter, a mother knows which one is hers.

All Ball was the name of Koko the gorilla's first pet kitten. Koko (a gorilla in captivity who was taught more than 1000 words in sign language) chose this pet out of an abandoned litter and named him "All Ball" because the kitten was a Manx and therefore had no tail. There are many films and a book documenting Koko playing joyfully with All Ball. Sadly, All Ball was killed in an accident just a few months after being adopted by Koko. After hearing the news, Koko is reported to have signed words expressing her grief and cried in private. It is a moving story that some researchers present as evidence of the profound emotional similarities between humans and other great apes.