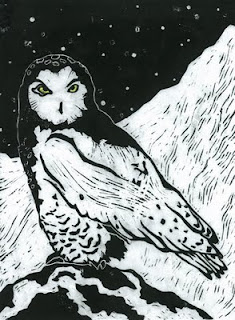 Image posted with the permission of the artist. Learn more about the work of Katherine Grey, as well as her gallery in Eagle, Idaho on her website, here.

Strange to be writing about a print involving snow in the middle of the summer, but I am sick of the heat. I also couldn't help it; I'm drawn to this image. There is something otherworldly about it. Perhaps because while the owl is quite clearly an owl, it also seems alien - such expressive, intelligent eyes while the mouth and nose are signified only by a small, black mark. Also, the stars in the night sky appear unfamiliar, as if the scene is located in some very far away part of the universe. As in an episode of the Twilight Zone, things seem backwards and out of place. The texture on the head reminds me of craters on the moon, while the streaks in the landscape allude to a long, lush body of hair. The part of my brain that knows how things are supposed to be tells me that feathers cover the owl's body, and the bird is perched on a rock in front of a mountain or hill, and yet as I look closer, every contour and shape seems to suggest something else, something more. This is no mundane wildlife illustration. The true weirdness of the owl - this lonesome, night predator, this chimera with a bird body and cat-like face - is captured in a manner which transcends the naturalistic.
Posted by Martha Knox at 7:28 PM