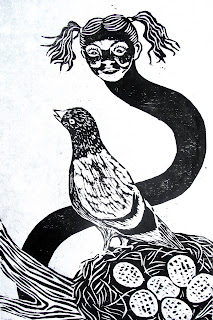 8" x 12" (image) 11" x 15" (paper)
Water based ink on Kozo paper
Available for purchase here.
I created this woodcut illustration for paragraph #141 of Alice's Adventures in Wonderland as part of the Alice Project/What is the Use of A Book Without Pictures. This is a project where a variety of artists illustrate Lewis Carroll's famous children's tale paragraph by paragraph. This is my third illustration for the project, and I wrote more about it here.
To give a little context to this image, Alice is speaking to a pigeon in the highest tree after her neck has grown so long that she can no longer see her body. The pigeon believes Alice is a snake who has come to eat her eggs. I decided to emphasize the anthropomorphized pigeon's point of view by making Alice seem particularly fearsome. The story of Alice in Wonderland turns out to be a dream, and even though it is Alice's dream, often in dreams the dreamer is able to see various points of view. Also, the relationship that children often have to animals is a power trip, in reaction to feeling powerless against adults in their lives. Animals typically fall below children in the totem poll, which is why mistreated children tend to mistreat pets. Not to say Alice is prone to abusing any animals, but after reading the stories, I believe that on some level she enjoys it when they fear her.
Paragraph #141 goes as follows:

‘I have tasted eggs, certainly,’ said Alice, who was a very truthful child, ‘but

little girls eat eggs quite as much as serpents do, you know.’

‘I don’t believe it,’ said the Pigeon, ‘but if they do, why then they’re a kind of

serpent, that’s all I can say.’