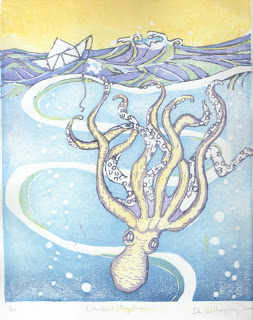 Image posted with permission of the artist. More of Ele Willoughby's work can be viewed and purchased at minouette.

This image reminds me a lot of the print I did last year: The Flood. They both feature giant, underwater, sea-creatures, churning up waters and threatening something small and man-made just above the surface. Also, even though the colors in mine are vivid primaries and this print uses pastels, the two prints are similarly bright and cheery in color, which is in contrast to the perilous subject matters. The main difference I see between the two images is that while the boat in this seems paper-like in its fragility, and ready to go under in its topsy-turvy placement off to the side, the house in my print is holding strong, upright and in the center.

The narrative in this print is more like that in Hokusai's iconic woodcut The Great Wave of Kanagawa, where the supreme power of nature, specifically the sea, over mankind is dramatically emphasized. However much the octopus is a dominant feature, its present seems more indicative of the danger, mystery, and power of the sea. Notice the title mentions not the creature, but the ocean.
Posted by Martha Knox at 11:38 AM